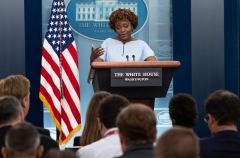 She was responding to a question about Biden calling on gas station owners to lower gas prices.

“My message to the companies running gas stations and setting prices at the pump is simple: this is a time of war and global peril. Bring down the price you are charging at the pump to reflect the cost you’re paying for the product. And do it now,” the president tweeted on Saturday. 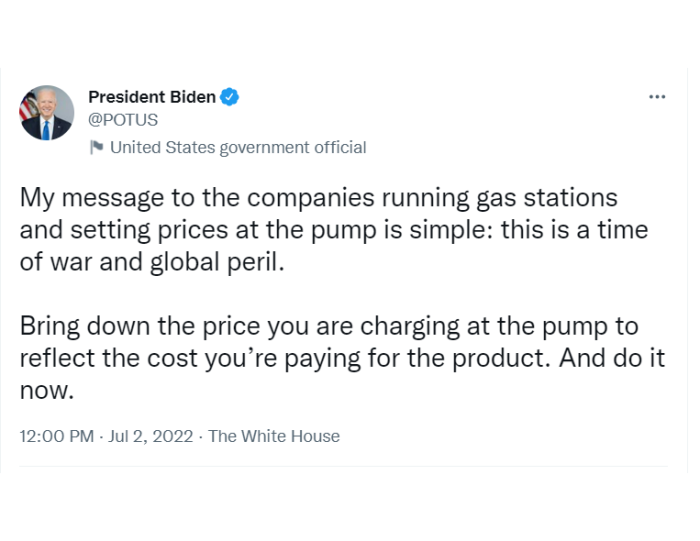 Amazon founder and CEO Jeff Bezos’ criticized Biden for the tweet, saying that the president’s statement was “either straight ahead misdirection or a deep misunderstanding of basic market dynamics.”

“Ouch. Inflation is far too important a problem for the White House to keep making statements like this. It’s either straight ahead misdirection or a deep misunderstanding of basic market dynamics,” Bezos tweeted on Saturday. 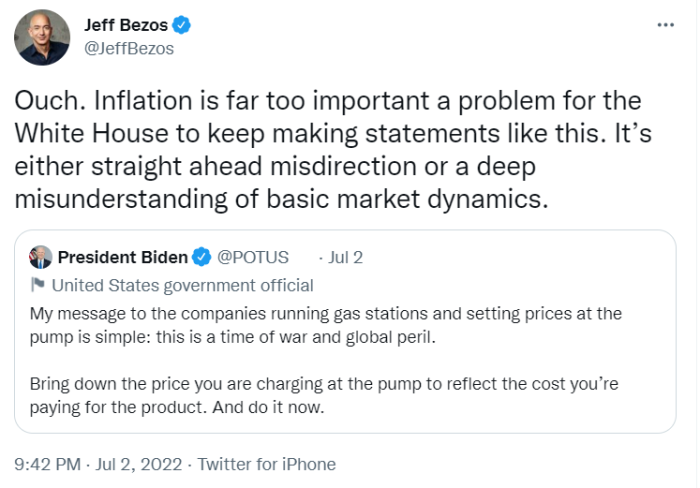 “And meanwhile, those same retailers are profiting— their profit have gone up about 40 cents, nearly 40 cents in that same period of time, so what the president is saying is that everyone along that chain, along that production chain line needs to– needs to make sure that they’re doing what is possible - their part in bringing down the costs for the American people,” she said.

“That is what we’re asking. Consumers should not be the first to pay and the last to benefit,” Jean-Pierre said.

“Jeff Bezos says the president’s tweet about this is ‘either straight ahead misdirection or a deep misunderstanding of basic market dynamics.’ Which is it?” Doocy asked.

“As you know, we completely disagree with Jeff Bezos. Look, we will continue to call on everyone along that distribution chain as I just mentioned, from oil companies to refineries to retailers to pass their lower costs through to consumers. That is what is important: to make sure that we should not make, again, consumers pay first and get that re- — and get that relief last,” Jean-Pierre said.