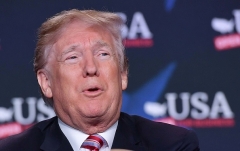 (CNSNews.com) - The Supreme Court on Thursday ruled that "no citizen, not even the President, is categorically above the common duty to produce evidence when called upon in a criminal proceeding.

"We reaffirm that principle today and hold that the President is neither absolutely immune from state criminal subpoena seeking his private papers nor entitled to a heightened standard of need."

The 7-2 ruling, written by Chief Justice John Roberts, makes it possible for Manhattan prosecutors to eventually get their hands on Trump's business and financial records as part of their Stormy Daniels hush-money investigation.

The majority opinion noted that the arguments presented to the Supreme Court and in the lower Court of Appeals "were limited to absolute immunity and heightened need.  The Court of Appeals, however, has directed that the case be returned to the District Court, where the President may raise further arguments as appropriate."

So it isn't over yet for the president, but it looks likely that the subpoena for his financial and business records could stand after additional litigation.

President Trump reacted in a flurry of tweets, including these two:

-- The Supreme Court sends case back to Lower Court, arguments to continue. This is all a political prosecution. I won the Mueller Witch Hunt, and others, and now I have to keep fighting in a politically corrupt New York. Not fair to this Presidency or Administration.

-- Courts in the past have given “broad deference”. BUT NOT ME!

In a second and related case, the Supreme Court ruled 7-2 that "Congressional subpoenas for information from the President" -- in this case, Trump's tax returns -- "implicate special concerns regarding the separation of powers."

The ruling said lower courts "did not take adequate account of those concerns." The ruling vacated lower court opinions upholding the congressional subpoenas and sent the case back for further proceedings.

The justices set out four points for the lower court to consider:

First, the courts should "carefully assess whether the asserted legislative purpose" of Congress in seeking Trump's tax returns "warrants the significant step of involving the President and his papers."

Second, to narrow the scope of possible conflict between the branches, the courts should insist on a subpoena no broader than reasonably necessary to support Congress’s professed legislative objective.

Third, the lower courts should consider the nature of the evidence offered by Congress to establish that a subpoena advances a valid legislative purpose.

And fourth, the lower courts should be careful to assess the burdens imposed on the President by a subpoena.

Referring to additional litigation, House Speaker Pelosi told a news conference on Thursday, "We will continue to go down that path." She added, "it's not good news for the president of the United States."