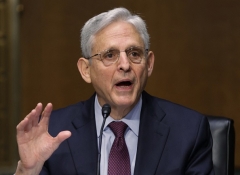 (CNSNews.com) - Attorney General Merrick Garland said on Wednesday he agrees that al-Qaida "has always presented and continues to present a persistent threat to the United States homeland."

But Garland told the Senate Judiciary Committee "I don't know" if the U.S. withdrawal from Afghanistan "will increase the risk from al-Qaida or not."

His testimony drew an incredulous response from Sen. Lindsey Graham (R-S.C.), who asked Garland if he agrees with the Defense Department official who recently warned that al Qaida could regain the ability to launch attacks outside of Afghanistan within a year or two. Do you agree with that?"

"I agree that al-Qaida has always presented and continues to present a persistent threat to the United States homeland," Garland said.

"Well, no, but the question is, what's changed?" Graham asked. "You say 'always.' But has any recent event change the likelihood of an attack?"

"You don't know that we withdrew from Afghanistan?" Graham asked.

"I know we withdrew. I don't know whether the withdrawal will increase the risk from al-Qaida or not. I do know --" Garland started to say, when Graham cut him off.

"So, you're the attorney general of the United States. (FBI Director) Wray testified openly twice that due to the lack of ability to have eyes and ears on the ground and the unreliability of the Taliban, that an attack on the United States within six months to a year is far more likely after our withdrawal. You're not aware that he said that?" Graham asked.

"The job of the Justice Department and the job of the FBI is to protect against those kinds of attacks in the homeland," Garland dodged.

"Does it make sense that that would be a dynamic of our withdrawal?" Graham asked. "Do you trust the Taliban to police al-Qaida and ISIS on our behalf?"

"I do not trust the Taliban," Garland said.

Graham noted that the Taliban has publicly stated they will not help the United States contain al Qaida or ISIS-K. "Are you aware of that?" he asked Garland.

"I think there's been inconsistent statements, but their statements are not anything that we can rely on," Garland said.

"Well, when they tell you to your face, we're not going to help you, do you think they're kidding? You think they really will help us, but they're just telling us to our face they won't?"

“Sir, I think, ISIS-K, al-Qaida associated forces are and continue to be--”

Graham interrupted again: "We're talking about the Taliban. The Taliban who has told the United States they will not work with our counterterrorism forces when it comes to al-Qaida or ISIS. What response should we have regarding the Taliban when they say that?"

"Well, I think we have a number of different tools available," Garland said.

"We have economic sanctions where they need money from the United States for humanitarian and other reasons. This is --"

"So, the leverage over the Taliban is whether or not we'll give them money?" Graham asked.

"Senator, the job of the Justice Department is protecting -- using the FBI and the National Security Agency --"

"The National Security Division is part of our counterterrorism operation, right?" Graham asked.

"Has anybody from the National Security Division briefed you about the increased likelihood of attack emanating from Afghanistan after our withdrawal?"

"Every day, I'm briefed by the FBI," Garland said.

"No, my question is specific," Graham said. "Has anybody briefed you about the increased likelihood of an attack emanating from Afghanistan by ISIS or al-Qaida because of our complete withdrawal?"

"We are worried about the risk of attack by ISIS-K --" Garland started to say.

"I know -- it's one thing to be worried," Graham said. "Has anybody told you the likelihood of an attack is greater because of our withdrawal or not?"

"There are different views about the degrees of likelihood that doesn't change our posture..."

"Is that in light of the withdrawal from Afghanistan?" Graham pressed.

"It's in light of a lot of changing circumstances in the world with respect to this question."

Graham, fed up, told Garland, "Well, let me just put a fine point on this. Secretary Wray has told the world that ISIS and al-Qaida in Afghanistan present a threat to our homeland. The Taliban has told us they're not going to help us when it comes to policing these groups. The Department of Defense has said we're six months to a year away from a possible attack by ISIS and al-Qaida. And it just seems to me there's not a sense of urgency about this."

"There is a sense of urgency," Garland insisted.

"We have strengthened and increased the efforts of our joint terrorism task forces. I have met with them," Garland said.

"Literally, what have you done?" Graham asked.

"I'm telling you," said Garland, who apparently had no good answer.

"Just put it in writing. Just write down what you've done," Graham said.

"Well, I'll be happy to have our staff assess what (here he trailed off, his words inaudible).