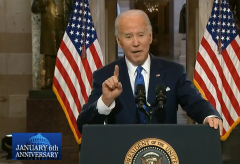 President Joe Biden gives a stern speech, blaming "the former president and his followers" for subverting democracy. But at the end, Biden called for unity. (Photo: Screen capture)

(CNSNews.com) - "I believe the power of the presidency and the purpose is to unite this nation, not divide it," President Joe Biden said in a stern -- and at times almost angry -- speech marking the January 6 attack on the U.S. Capitol.

Biden made 16 references to "the former president," blaming him for rallying the mob to attack the Capitol; mocking him as "not just a former president but a defeated former president" who lost by 7 million votes; and saying Trump's "bruised ego matters more to him than our democracy or our Constitution."

Biden did not spare Trump's "followers" or even Republicans: He said "too many" Republicans are "transforming the party" by supporting "a single man." "They seem no longer to want to be the Party of Lincoln, Eisenhower, Reagan, the Bushes," Biden said.

Biden's tone was forceful, even angry. He began his speech by recapping the events of January 6, 2021, which most Americans agree was a terrible day in our history -- but maybe not the very worst, the equivalent of Pearl Harbor or September 11, as Vice President Kamala Harris portrayed it.

"To state the obvious, one year ago today, in this sacred place, democracy was attacked, simply attacked. The will of the people was under assault, the Constitution, our Constitution, faced the gravest of threats," Biden said.

A few sentences later, Biden began his attack on his predecessor, whom he blames for inciting the actions of his supporters: "For the first time in our history, a president had not just lost an election, he tried to prevent the peaceful transfer of power as a violent mob reached the Capitol. But they failed..."

Biden, speaking in the historic Statuary Hall, urged his audience to "close your eyes; go back to that day. What do you see? Rioters rampaging, waving for the first time inside this Capitol a Confederate flag that symbolized the cause to destroy America, to rip us apart..." He went on with his "mob-breaking-windows" and "kicking-in-doors" descriptions.

Then he returned to his attack on "the former president," whose name he never used: "What did we not see? We didn't see a former president, who had just rallied the mob to attack, sitting in a private dining room off the Oval Office in the White House, watching it all on television, and doing nothing for hours as police were assaulted, lives at risk, the nation’s capital under siege...This was an armed insurrection," Biden claimed.

(The only shot fired on that day came from a Capitol Police officer's gun, killing a protester.)

"This is not about being bogged down in the past," Biden said -- after reciting events of the past in detail. "This is about making sure the past isn't buried. That is the only way forward."

Then Biden launched into a discussion about truth and lies, suggesting that Republicans, especially Trump and his supporters, have cornered the market on "big lies."

"My fellow Americans, in life, there’s truth, and tragically there are lies. Lies conceived and spread for profit and power. We must be absolutely clear about what is true and what is a lie. And here's the truth: The former president of the United States of America has created and spread a web of lies about the 2020 election. He's done so because he values power over principle. Because he sees his own interest as more important than his country's interest and America's interest. And because his bruised ego matters more to him than our democracy or our Constitution, he cannot accept he lost."

"He's done what no president in American history, the history of this country has ever, ever done. He refused to accept the results of an election and the will of the American people."

Then Biden attacked Republicans, saying "too many" are "transforming the party" by supporting "a single man." "They seem no longer to want to be the party -- the party of Lincoln, Eisenhower, Reagan, the Bushes," Biden said.

"Here's the truth," he said. "The election of 2020 was the greatest demonstration of democracy in the history of this country...over 150 million Americans went to the polls and voted that day, in a pandemic."

"Right now, in state after state, new laws are being written, not to protect the vote, but to deny it. Not only to suppress the vote, but to subvert it. Not to strengthen or protect our democracy but because the former president lost. Instead of looking at election results from 2020 and saying they need new ideas, or better ideas to win more votes, the former president and his supporters have decided the only way for them to win is to suppress your vote and subvert our elections."

As he moved toward the conclusion of his speech, Biden said it's time for "all of us" to "stand for the rule of law."

He said the "promise of America" is at risk, "targeted by the forces that value brute strength over the sanctity of democracy..."

"The former president, who lies about this election and the mob that attacked this Capitol could not be further away from the core American values. They want to rule or they will ruin. Ruin what our country fought for at Lexington and Concord, Gettysburg and Omaha Beach, Seneca Falls, Selma, Alabama.  What were we fighting for -- the right to vote. The right to govern ourselves. The right to determine our own destiny."

Biden said the "pain and scars" of January 6 "run deep." Then he repeated his shopworn "battle for the soul of America" line.

"We will make sure the will of the people is heard -- that the ballot prevails," Biden said.

"This is not a land of kings or autocrats. This is a nation of order, not chaos; peace, not violence. Here in America, the people rule through the ballot. Their will prevails. Let us remember, together, we are one nation under God, indivisible..."