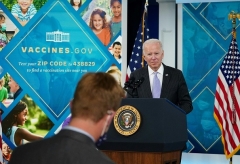 (CNSNews.com) - President Joe Biden told Americans on Friday we're in a "historically strong recovery," thanks to his policies; the recovery will be "fully felt" once Congress passes his multi-trillion infrastructure plans; and he asserted there is "broad public support" for his vaccine mandates, which he said are also necessary for a full economic recovery.

"For our economy to fully recover, we need to keep driving vaccinations up and COVID down."

Biden said now that CDC has recommended vaccination for children 5-11, his administration is supplying enough vaccines for every child in America in that age group.

He pointed to an OSHA rule issued Thursday, requiring employers with 100 or more employees to ensure that each of their workers is fully vaccinated or tests negative for COVID-19 at least once a week. Also on Thursday, the Biden administration issued a rule requiring full vaccination for all staff at health care facilities that treat Medicare or Medicaid patients.

This is on top of his earlier vaccination mandate for all federal workers, the military, and federal contractors.

"Together, these rules, along with other requirements we've put in place, means that two-thirds of all workers in the United States are covered by vaccination requirements," Biden said on Friday. "These requirements have broad public support, and they work."

Biden said vaccination requirements -- which he once disavowed -- are "good for the workers, for their colleagues, for their loved ones, and for their communities. It's also good for the economy," he insisted, because it will make more people feel safe enough to re-enter the workforce.

Speaking of the economy, Biden plugged the two multi-trillion-dollar infrastructure bills now pending in the House -- one bipartisan, the other with absolutely no Republican support.

"I want to say very clearly, if your number-one issue is the cost of living, the number one priority should be seeing Congress pass these bills," Biden said.

Not only will spending another $3 trillion or so "ease inflation," he said, "these bills will provide families with, as my dad used to say, a little more breathing room. That's because the Build Back Better framework lowers your bills for healthcare, childcare, prescription drugs and pre-school, and families get tax cut. That's how you end some of the anxiety people are feeling about the economy. That's how we give people some breathing room."

The bipartisan bill -- physical infrastructure -- "will create millions of jobs rebuilding the arteries of our economy -- and by the way, these two bills add up to the largest effort to combat climate change in the history of the United States of America," Biden continued.

"Right now, we stand on the cusp of historic economic progress. Two bills that together will create millions of jobs, grow the economy, invest in our nation and people, lower cost for families and turn climate crisis into an opportunity and put us on a path not only to compete but win the economic competition for the 21st Century against all comers."

Biden said passing the bills will show the American people, "we hear your voices."

He apparently chooses to ignore the "voices" of the voters who spoke on Tuesday -- voters who tended to favor Republicans over Democrats.