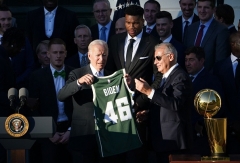 President Joe Biden poses with a jersey during an event honoring the 2021 NBA Championship Milwaukee Bucks on the South Lawn of the White House on November 8, 2021. (Photo by MANDEL NGAN/AFP via Getty Images)

(CNSNews.com) - President Joe Biden welcomed the champion Milwaukee Bucks to the White House on Monday, congratulating the team for their winning season; thanking them for taking a stand "for justice and peace in the wake of the Jacob Blake shooting" in Kenosha, Wisconsin; and also thanking them for encouraging fans to get vaccinated.

At the end of his mostly scripted remarks, the president -- confused -- told the team, "So, congratulations, Milwaukee Bucks, the best of luck for the rest of this season."

The president of the United States turned this way and that, joking with the men behind him -- "I'm Joe Biden," he said.

"I get you guys confused, you know. Come up," the president told Bucks co-owner Marc Lasry, shaking his hand, but not saying his name.

Lasry stepped up to the microphone, thanking the president, making a few remarks, then handing it off to star player Giannis Antetokounmpo, who talked about the "awesome" experience of being invited to the White House.

When Giannis finished, the President of the United States, host of the event, made a few more remarks, then once again turned to his staff: "And let me ask the staff, what are we supposed to do now? We're doing a photograph?" Biden asked, shading his eyes and looking to someone off-camara.

"We're giving you the jersey," a Bucks player said.

"Give me a jersey," Biden repeated. He accepted the jersey from Lasry and held it up, saying, "Oh, all right. OK, man. Thank you. All right. There you go."

But Biden forgot that he was supposed to wait for two star players to flank him as he held the jersey. Lasry shrugged at the athletes, who were standing behind Biden, and Bucks guard Donte DiVincenzo mouthed, "It's okay."

"All right," Biden said, as they posed.

Welcoming teams to the White House is one of the lighter moments of the presidency, but for Biden, it seemed to be a heavy lift on Monday.

For the record, in the PBS recording of the event, someone -- maybe someone on the set -- whispers, “Oh, God,” after Biden asks who he’s “supposed to introduce now.”