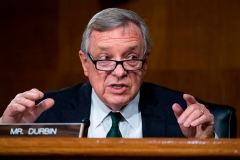 But they will use their platform to knock committee Republicans who are in tight races, Sen. Dick Durbin (D-Ill.) told NBC's "Meet the Press."

"Take a look at the composition, the Republican composition, on the Senate Judiciary Committee," Durbin said on Sunday:

Let's start with Texas. Senator Cornyn is in a very tight race for re-election. He's also in a state where there are 1.7 million people who will lose their health insurance when Amy Coney Barrett votes to eliminate that program, another 12 million who have pre-existing conditions.

Now you just go down the table there. I should have started with the Chairman, Lindsey Graham, in the state of South Carolina. He has 242,000 who will lose their insurance if Amy Coney Barrett eliminates the Affordable Care Act and 2 million who have pre-existing conditions.

So you want to know the point we're going to make? We're making a point that this not only has an impact on the lives of so many innocent Americans, it could impact the members of this committee.

Durbin complained that Republicans are jamming through Barrett's nomination "at a breakneck pace without the investigation that usually comes with these. And those are the issues," he said:

And we believe that, once the Republican voters across this country wake up to the reality of the strategy, many of them are going to say to their senators, listen, this is not what we bargained for. We may be conservative, but we're not crazy. Our family needs health insurance protection," Durbin said.

I mean, it's understandable people are skeptical of the Republican message and are fearful of what's going to happen if this Supreme Court nominee goes through and threatens their very health insurance.