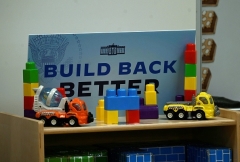 A "build back better" sign sits in a pre-k classroom as President Joe Biden visits an elementary school in North Plainfield, New Jersey on October 25, 2021. (Photo by ANDREW CABALLERO-REYNOLDS/AFP via Getty Images)

(CNSNews.com) - President Joe Biden's big-government, entitlement agenda appears to be crumbling, as one of the key provisions of his Build Back Better plan -- paid family and medical leave -- reportedly may be dropped because Sen. Joe Manchin (D-W.Va.) opposes it.

Manchin said on Wednesday he can't go along with new entitlement programs when the existing ones face financial strain:

"I've been very clear -- to expand social programs when you have trust funds that aren't solvent or going insolvent, I can't explain that. It doesn't make sense to me. I want to work with everyone as long as we can start paying for things, that's all. I can't put this burden on my grandchildren," Manchin said.

Manchin expressed concerns about budget deficits. And he said he doesn't like the proposed billionaire's tax on unrealized capital gains, which Democrats have floated as a way to help pay for their multi-trillion-dollar agenda:

"I don't like it," Manchin said. "I don't like the connotation that we're targeting different people. There's people that basically, that contribute to society, that create a lot of jobs, and invest a lot of money, and give a lot to philanthropic pursuits," he said.

Manchin is pushing for a vote on the bipartisan infrastructure bill, but the House Progressive Caucus continues to insist there will be no vote on that bill unless the second Build Back Better package comes up for a vote at the same time.

Rep. Mark Pocan (D-Wis.) told CNN on Wednesday that "nothing has changed on what I or Pramila (Jayapal) or others in the Progressive Caucus have said. We want to send the president to Europe with a big win on climate. And the big win on climate is in the Build Back Better Act, not the infrastructure bill. So we have to do both together to give him that credibility that he really needs to be able to go there with."

Meanwhile, President Joe Biden delayed his planned departure for Rome, Italy today by several hours so he can meet with Democrat lawmakers. He was hoping to go to the climate conference in Scotland with legislative victories to hold up as proof of the U.S. commitment to climate change.

The green new deal is included in the massive Build Back Better plan, which -- as noted above -- has stalled.

"We have to get this done," someone tweeted under Biden's name.

Press reports say Biden will announce a Build Back Better "framework" that all Democrats supposedly agree on, apparently to spur passage of the bipartisan infrastructure bill passed by the Senate and pending in the House.

The Democrat disarray stems partly from the fact that they do not have a mandate from voters, as Senate Minority Leader Mitch McConnell frequently has noted.

The Senate is evenly divided, 50 Democrats, 50 Republicans; and Democrats have a three-seat majority in the House.

And without a mandate, the Democrats' latest multi-trillion tax-and-spending plan appears to be falling apart.