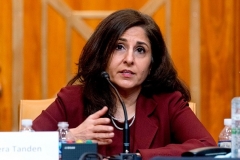 Neera Tanden, nominee for Director of the Office of Management and Budget (OMB), testifies before the Senate Budget Committee on February 10, 2021. (Photo by ANDREW HARNIK/POOL/AFP via Getty Images)

The director of OMB is responsible for overseeing the development and implementation of the federal budget and plays a significant role in any Administration’s fiscal and regulatory agenda.  Congress has to be able to trust the OMB director to make countless decisions in an impartial manner, carrying out the letter of the law and congressional intent.  Neera Tanden has neither the experience nor the temperament to lead this critical agency.  Her past actions have demonstrated exactly the kind of animosity that President Biden has pledged to transcend.

In addition, Ms. Tanden’s decision to delete more than a thousand tweets in the days before her nomination was announced raises concerns about her commitment to transparency.  Should Congress need to review documents or actions taken by OMB, we must have confidence that the Director will be forthcoming.

Collins joins Democrat Sen. Joe Manchin of West Virginia, who also announced he will vote no.

“I believe her overtly partisan statements will have a toxic and detrimental impact on the important working relationship between members of Congress and the next director of the Office of Management and Budget,” Manchin said. “For this reason, I cannot support her nomination.”

Also See:
Biden's Partisan OMB Nominee Apologizes for 'Some of My Past Language' Insulting Republicans