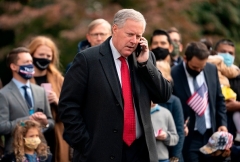 White House Chief of Staff Mark Meadows speaks on his cell phone as he waits for US President Donald Trump to depart the White House on October 30, 2020. The January 6 committee has now subpoenaed his cell phone records. (Photo by ANDREW CABALLERO-REYNOLDS/AFP via Getty Images)

Meadows' lawsuit seeks to "invalidate and prohibit the enforcement of two overly broad and unduly burdensome subpoenas" issued by the January 6 committee, which "wrongly seeks to compel both Mr. Meadows and a third party telecommunications company (Verizon Wireless) to provide information to the Select Committee that the Committee lacks lawful authority to seek and to obtain."

According to the lawsuit, the committee lacks "any valid legislative power and threatens to violate longstanding principles of executive privilege and immunity that are of constitutional origin and dimension.

"Without intervention by this Court, Mr. Meadows faces the harm of both being illegally coerced into violating the Constitution and having a third party involuntarily violate Mr. Meadows rights and the requirements of relevant laws governing records of electronic communications. Only this Court can prevent these grave harms," says the complaint filed in federal court in Washington.

In response, Committee Chairman Bennie Thompson and Republican Committee member Liz Cheney issued a statement, saying: "Mr. Meadows's flawed lawsuit won't succeed at slowing down the Select Committee's investigation or stopping us from getting the information we’re seeking. The Select Committee will meet next week to advance a report recommending that the House cite Mr. Meadows for contempt of Congress and refer him to the Department of Justice for prosecution.”

"Well, obviously Congress is going to do what they already intended to do, which is hold me in contempt," Meadows told Fox News's Laura Ingraham on Wednesday night:

This lawsuit really goes to the heart of the matter. The fact is, we have been trying for weeks and weeks to make accommodations to share non-privileged -- and I want to stress that -- non-privileged information while protecting the executive privilege that President Trump has claimed.

And yet, what we've found is each and every time there's an overreach on the part of the committee. And then in the last 72 hours, we've received a subpoena that went to our telecommunication carrier. It was so broad that you would have to do some type of legislative contortions to find a legislative reason for that subpoena.

And I can tell you, they did this without notifying us. We came to the conclusion that they are still going to try to question those personal private conversations that I had with the president of the United States and other senior officials in the West Wing. And quite frankly, their scope is way too broad. So we're going to challenge it.

Meadows his communications would show that no one in the White House had any advance knowledge of the security breach at the U.S. Capitol on January 6th. "I can also tell you, and we've said this publicly -- I've shared this with you before -- President Trump not only authorized but encouraged the authorization of 10,000 National guards leading up to that. That's not something that you do if you are anticipating, you know, some kind of nefarious motive.

"I will say this. Here's the interesting thing is, in the spirit of trying to cooperate with this committee, they've made it very clear that they are not going to do that. And they are doing a fishing expedition. It's broadly believed that they've issued more subpoenas in the last two months than they have in the last decade..."

Ingraham, frustrated, interrupted, telling Meadows the committee is "out for blood" and "they don't care about, you know, who organized what. They are trolling for any little tidbit that they can go run over to "The New York Times" and have a headline that makes you and Trump and everyone else look bad. That's what they want...I know what they are doing."

"Without a doubt, and Laura, you are exactly right," Meadows agreed. "And that is one of the reasons why we are having to fight back. At this particular time, there is not a legislative motive. And I can tell you, you know, regardless of the consequences, we need to fight back."

According to Meadows' lawsuit:

Mr. Meadows believed that the Select Committee would act in good faith and in accordance with their agreement that he appear for a voluntary deposition on issues outside the scope of executive privilege, until on December 4, 2021 he was blindsided by a letter from Verizon Wireless, the carrier for his previous personal cell phone.

The letter references a cell phone registered to Meadows for Congress that was used by Mr. Meadows as his personal cell phone during his tenure as White House Chief of Staff. It is also the same cell phone from which Mr. Meadows’ counsel had reviewed and produced records to the Select Committee on December 3.

The letter from Verizon Wireless relayed the fact that it had received a subpoena (“Verizon subpoena”) from the Select Committee requesting certain phone records. Verizon noted that it would comply with the subpoena by producing the records unless it received “a court document challenging the subpoena by December 15, 2021.”

The cell phone data requested could include all calls, text messages, and other records of communications associated with that phone number...The Verizon subpoena requested all Mr. Meadows’ personal cell phone data for four months: from October 1, 2020 and January 31, 2021.

The breadth and invasiveness of the Verizon subpoena also gave the appearance of a criminal investigation, not a legislative fact-finding mission. It seeks private data used to track an individual person’s communications and location, information that would bear on an investigation into that individual, not on potential legislation to be passed by Congress.

It also requests this data for a period more than three months prior to January 6, the ostensible focus of the Committee’s supposed legislative recommendations.