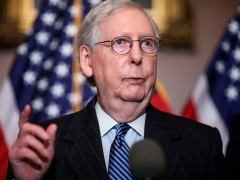 (CNSNews.com) - Expressing great relief, Senate Republican Leader Mitch McConnell (R-Ky.) on Tuesday discussed "the precipice from which the Senate has stepped back."

Given assurances by two Democrats -- Sens. Joe Manchin and Kyrsten Sinema -- that they will not vote to abolish the filibuster, McConnell has now agreed to move forward with a 50-50 power-sharing agreement with Democrats.

In a floor speech, he explained why the 60-vote threshold to end debate on legislation is so important, as frustrating as it may be at times.

“No short-term policy win justifies destroying the Senate as we know it," he said:

When it comes to law-making, the Framers’ vision and our history are clear. The Senate exists to require deliberation and cooperation.

James Madison said the Senate’s job was to provide a ‘complicated check’ against ‘improper acts of legislation.’ We ensure that laws earn enough buy-in to receive the lasting consent of the governed. We stop bad ideas, improve good ideas, and keep laws from swinging wildly with every election.

Our friend Lamar Alexander put it this way in his farewell speech: The Senate exists to produce ‘broad agreements on controversial issues that become laws most of us have voted for and that a diverse country will accept.’

More than any other feature, it is the Senate’s 60-vote threshold to end debate on legislation that achieves this.

It ensures narrow interests cannot ignore the rest of the country. It embodies Jefferson’s maxim that ‘great innovations should not be forced on slender majorities.’

“The bar for lawmaking is high. It should be high. Even if both parties take turns being slightly frustrated by it.

If your legislation can’t pass the Senate, you don’t scrap the rules or lower the standards. You improve your idea, take your case to the people, or both.

McConnell noted that President Trump pressured him to scrap the filibuster when it was protecting Democrats, but "I stood firm. I said we would not do that to our colleagues.

“No short-term policy win justifies destroying the Senate as we know it. Especially since laws would become so brittle and reversible."

During the Trump years, Democrats used the filibuster to shape and block legislation, McConnell said. "The same tool that some Democrats now want to destroy, they used freely and liberally throughout their years in the minority."

McConnell went on to explain the chaos that would ensue if Democrats did abolish the filibuster.

“If this majority went scorched-earth, this body would grind to a halt like we’ve never seen," he warned, giving several examples.

His full speech can be read here.