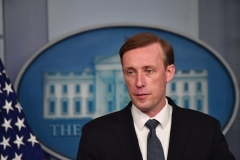 (CNSNews.com) - Following what he called "an intensive week of diplomacy," National Security Adviser Jake Sullivan said the United States will now "reflect" on where things stand with Russia "and consult with allies and partners on how to proceed."

We continue to coordinate intensively with partners on severe economic measures in response to a further Russian invasion of Ukraine," Sullivan said. "We continue to work with allies and NATO on changes in force posture and capabilities, especially on NATO's eastern flank if that scenario arises. And we continue to support Ukraine and the Ukrainian people in the defense of their sovereignty and territorial integrity.

We have been very clear with Russia on the costs and consequences of further military action or destabilization in Ukraine. So, we're ready either way. We're ready to make progress at the negotiating table, serious tangible progress on important issues of concern to us, to Europe, and to Russia in an environment of de-escalation, and we're ready to take the necessary and proper steps to defend our allies, support our partners, and respond robustly to any naked aggression that might occur.

In our view, diplomacy is the more sensible path. The Russians will have to make their own assessment. In terms of next steps in the diplomatic process, we'll remain engaged with allies and partners and with the Russians and make determinations in the coming days about what comes next.

Sullivan said no more talks are scheduled, but "We're in communication with the Russians and we'll see what comes next." He said reports that the U.S. and NATO will reduce the number of troops in Eastern Europe are "wrong."

On Friday, Russia's Foreign Minister Sergey Lavrov was quoted as saying, "We have run out of patience." He accused the West of "hubris" and said Russia expects a written response to its demands by next week.

A reporter asked Sullivan about comments made by Russia's Deputy Foreign Minister Sergei Ryabkov, who hinted that Russia might deploy forces in Cuba/Latin America. "Is that something that the U.S. is concerned about?" the reporter asked.

"I'm not going to respond to bluster in the public commentary. That wasn't raised in the discussions at the strategic stability dialog. If Russia were to move in that direction, we would deal with it decisively," Sullivan said.

According to the Associated Press:

Russia raised the stakes Thursday in its dispute with the West over Ukraine and NATO’s expansion when a top diplomat refused to rule out a military deployment to Cuba and Venezuela if tensions with the United States escalate.

Deputy Foreign Minister Sergei Ryabkov said he could “neither confirm nor exclude” the possibility of Russia sending military assets to Latin America if the U.S. and its allies don’t curtail their military activities on Russia’s doorstep.