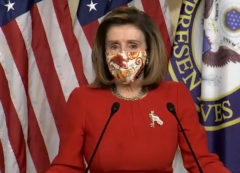 (CNSNews.com) - Making the District of Columbia the 51st state would improve security at the U.S. Capitol, House Speaker Nancy Pelosi told a news conference on Thursday.

Pelosi said she had just been briefed by Lt.-General Russel Honoré, the man she tasked to make security recommendations following the January 6 attack. That review process is ongoing.

"One important thing," Pelosi said, "it would be really good if Washington, D.C., if the District of Columbia could operate as a state, as any governor can do, to call out the National Guard without getting the permission of the federal government.

"It shouldn't have to happen that way," she said.

Pelosi pointed to a Jan. 4 letter from then-Acting Defense Secretary Christopher Miller "saying what he wasn't going to do."

"It's most unfortunate. But I think everything has to be subjected to the harshest review to make sure this (attack) doesn't come again," Pelosi said.

On Jan. 4, Acting Defense Secretary Christopher Miller sent a memo to the Secretary of the Army, authorizing National Guard support for the District of Columbia, but setting limits on the troops, saying the Guard troops could not be armed or “interact physically with protesters, except when necessary in self-defense or defense of others.”