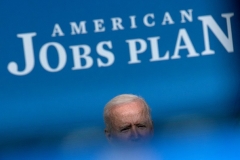 (CNSNews.com) - Sen. John Barrasso (R-Wyo.), chairman of the Republican Conference, said on Sunday he objects to the "trillions and trillions of dollars of reckless spending" envisioned by President Joe Biden and his fellow Democrats.

Even if your taxes don't go up to pay for Biden's infrastructure-plus plan, the cost of living will go up, he told ABC's "This Week."

"When I look at this, this is a staggering amount of spending, like someone with a new credit card," Barrasso said:

And these are for things that we don't necessarily need, we certainly can't afford, but they're going to delight the liberal left of the party.

It seems to me that this is a cradle-to-grave role of government, whether it's paying for child care for everyone, college -- free college for everyone, and ultimately, someone is going to have to pay for this. It's almost creating an addiction to spending.

So, it's either massive new debt to China, as well as massive taxing, probably the largest tax increase in 50 years. And anybody that says this is going to be just on the 1 percent or big corporations -- I mean, that's just phony math. Americans understand that with this kind of spending and this kind of borrowing and taxing, everyone is going to get hit in their wallet.

The Biden administration insists that people earning less than $400,000 will not pay more in taxes -- that only the very wealthy, including corporations, will pay more.

But middle- and low-income Americans will still be impacted, Barrasso said:

And I will tell you, Democrats are also getting concerned about the -- all of this spending and borrowing, realizing that they're going to be held accountable in the 2022 election. And some Democrats publicly, but most privately, are saying, this isn't sustainable. We cannot continue with this reckless borrowing and spending, especially with the taxes coming out of a pandemic.

Barrasso said he and other Republicans are "working closely" with the Biden administration and congressional Democrats to strike a deal on "core infrastructure," which he described as "roads, bridges, ports, airports, waterways -- things that people think of when they think of infrastructure, things that will get our economy firing on all cylinders."

"So I actually believe there's a deal to be had if we leave things out like the Green New Deal, and recyclable cafeteria trays and climate justice."