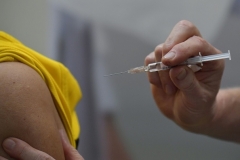 (CNSNews.com) - "STOCK MARKET UP BIG, VACCINE COMING SOON. REPORT 90% EFFECTIVE. SUCH GREAT NEWS!" President Donald Trump tweeted on Monday, as his Operation Warp Speed appears to be nearing the only thing that will realistically "crush" the virus – the development of an effective vaccine.

The stock market soared on the news, which comes six days after the election that Democrats insist Joe Biden won, despite the continuing vote count and legal challenges in a few swing states.

Rep. Dan Crenshaw (R-Texas) tweeted on Monday: "Great work by the administration pushing the historic and unprecedented vaccine development under Operation Warp Speed, even as cynical Democrats attempted to undermine its credibility. Joe Biden’s only plan for the virus is Trump’s plan. Always has been."

Likewise, Trump ally Geraldo Rivera tweeted: "If news of #Pfizer miracle vaccine had come just two weeks earlier, the results of the election might have been different. It was the urging & inspiration of @realDonaldTrump that drove the timing of this potentially history making, life-saving result."

The Republican Party also weighed in: "Important #OperationWarpSpeed update this morning! More evidence that President Trump’s aggressive response to the coronavirus pandemic is paying off for the American people."

On the same day Pfizer made its big announcement, the Biden-Harris campaign announced its promised COVID-19 Advisory Board, which will advise "President-elect Biden, Vice President-elect Harris, and the Transition’s COVID-19 staff on how to deal with the pandemic.”

The advisory board will be led by co-chairs Dr. David Kessler, Dr. Vivek Murthy, and Dr. Marcella Nunez-Smith.

“Dealing with the coronavirus pandemic is one of the most important battles our administration will face, and I will be informed by science and by experts,” said President-elect Biden in a statement on his transition website.

“The advisory board will help shape my approach to managing the surge in reported infections; ensuring vaccines are safe, effective, and distributed efficiently, equitably, and free; and protecting at-risk populations.”

Biden campaigned on a promise to crush the virus by listening to the "science."  He and his Democrat/media allies constantly faulted President Trump for having no plan.

In addition to distribution of the vaccine that President Trump fast-tracked, Biden is expected to lobby state officials for what would amount to a national mask mandate.