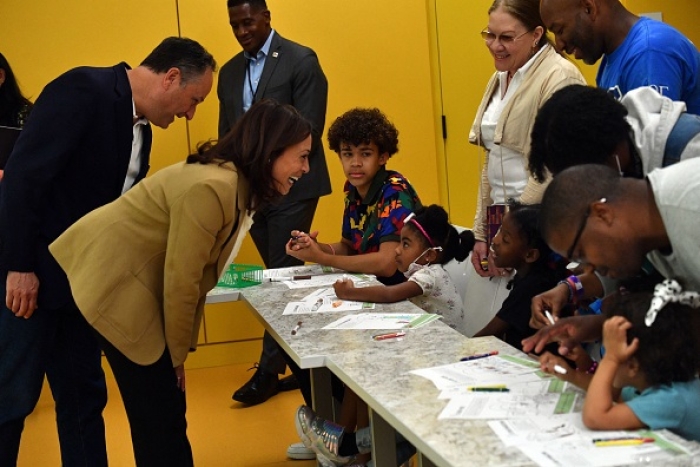 (CNSNews.com) - Vice President Kamala Harris spent part of her Saturday sitting down for an interview at the Essence Festival in New Orleans.

Most of her conversation with actress/singer Keke Palmer focused on Harris's job as vice president, which requires "multi-tasking" and prioritizing.

According to a transcript posted on the White House website, Harris said it is the job of the president and vice president to determine "what are the most critical issues."

"So, for example, for me and the president, one of the biggest issues that has been treated as maybe a small issue is — is anything that affects children.  I think, you know, sometimes in public policy, I think folks think because they’re small people, it’s a small issue. No. If you impact in a positive way the needs of a child, the entire community benefits for generations.

"And so we have been looking at what we need to do, for example, at also supporting children in the context of the family they are being raised — right? — so that grandmother or that auntie or that mother or that father--

"So what we have done, for example, is we have a — we have instituted a tax cut for childcare expenses like medication and school supplies — $8,000 a year.  A tax cut. Not one Republican voted for it.

"We have extended the Child Tax Credit, and in that — in so doing, in the first year, reduced black child poverty by almost 40 percent. Cannot get a Republican to help us extend it beyond.

"But these are some of the things that we have been doing, understanding the generational impact, not to mention the work that we need to do that is about foreign policy.

"I have met with, I don’t know, probably at least two dozen foreign leaders — prime ministers, presidents. I just recently convened the Caribbean prime ministers and presidents around what we should do, as the United States, seeing them as our neighbors in the Western Hemisphere and giving appropriate support there.

At that point -- inflation being harmful to families with children especially -- Keke Palmer turned the conversation in a different direction.

Although Harris claimed that "anything that affects children" is the Biden administration's biggest priority, she again condemned the recent Supreme Court decision overturning Roe v. Wade:

"And what is so outrageous about this on every level is: One, it is the taking of a right that was given and guaranteed and something that we took for granted to be settled law," Harris said:

"What essentially has happened is the statement has been made that the government has a right to come in your home and tell you, as a woman and as a family, what you should do with your body.

"And the point has to be this: We have to recognize we’re a nation that was founded on certain principles that are — that are grounded in the concept of freedom and liberty. We also know that we’ve had a history in this country of government, trying to claim ownership over human bodies.

"And we had supposedly evolved from that time and that way of thinking. So this is very problematic on so many levels."

Earlier in the interview, Harris described a typical day in the White House:

"I work out every morning.  Then I start my day reading the Presidential Daily Brief. We call it the “PDB” for short -- which is classified information generated by our intelligence community about hot spots around the world and threats to our national security. So I read that every morning.

"And my office in the West Wing is — I don’t know how many feet -- not very far — you know, a minute to get from my office to the Oval Office.  And so, often when I arrive at the West Wing, I’ll walk down to the Oval Office, and the President and I will have a meeting with the heads of our intelligence community — including, often, the Secretary of Defense will be there, the Secretary of State will be there, the Director of the CIA will be there — and we will talk about the threats to our nation and the priorities that we face.

"And so that is often how the day will start. "And then there will be a series...There are a lot — there’s a lot of decisions to be made. And then the day will proceed."

Harris said one of her "favorite" days recently was presiding at the vote to make Ketanji Brown Jackson the next Supreme Court justice.

"And it was so special, Keke, because, you know, I got there and then it was taking a while for the vote to happen.  And then two of my friends and colleagues when I was in the Senate — Raphael Warnock — Senator Warnock from Georgia...And Senator Cory Booker from New Jersey.

"And so the two of them walked up when I was in the chair because there was a pause.  And I had just finished, on my stationery, writing a note to my goddaughter Helena — who’s actually here with me today — to talk to her about as a, you know, 17-year-old, young, black woman what this day would mean for her and her life.

"And I wrote her a note.  And I had some extra stationery.  And so when the two of them came up, I said, 'Well, y’all need to write a note to somebody too.' So I handed them my stationary, and then each of them also wrote a note to someone in their life about the meaning — the historic meaning of that day."

Ketanji Brown Jackson is the third black person to sit on the nation's highest court, but the first black woman.