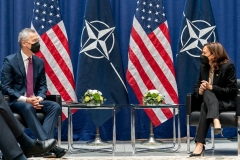 And if that happens, she said, Russia and Putin will be hit with "some of the greatest sanctions, if not the strongest, that we’ve ever issued."

"When we look at the significance of these sanctions, they are immense," Harris said. "And so, all nations who are a part of this understand that we cannot take lightly or speak lightly about what we are prepared to do, because we do understand the cost we are exacting, and it is severe."

(Defense Secretary Lloyd Austin likewise noted the severity of the promised sanctions, not only on Putin, but also on ordinary Russians and even Americans, who will face higher gas prices and other disruptions.)

Harris said the threatened sanctions are intended to deter a Russian invasion. They would be "directed at institutions — in particular, financial institutions — and individuals, and it will exact absolute harm for the Russian economy and their government."

A reporter asked Harris, "What should Americans be braced for?  What could they possibly be facing?  The President has already said Americans will be facing some economic fallout or some hardships.  Can you explain to Americans what exactly will they face if this happened?"

"Sure," Harris replied. "As the President talked about in his speech, we are aware that, again, when America stands for her principles and all of the things that we hold dear, it requires sometimes for us to put ourselves out there in a way that maybe we will incur some cost.

"And in this situation, that may relate to energy costs, for example. But we are taking very specific and appropriate, I believe, steps to mitigate what that cost might be if it happens."

Another reporter asked Harris about the "endgame," or how the United States will "disentangle" from potential conflict with Russia:

"I don’t — we don’t consider ourselves to be entangled," Harris said. "But we’re very clear of our principles and our purpose, which is to be aligned with our Allies, understanding that — I mean, listen, guys, we’re talking about the potential for war in Europe.

"I mean, let’s really take a moment to understand the significance of what we’re talking about.  It’s been over 70 years.  And through those 70 years, as I mentioned yesterday, there has been peace and security.  We are talking about the real possibility of war in Europe," Harris said.

"So our position is, for us, very clear, which is as a leader — which we have been, bringing together the Allies, working together around our collective and unified position — that we would all not just prefer, we desire, we believe it is in the best interest of all that there is a diplomatic end to this moment. And so where do we want this to end? That is where we want it to end."

Harris said she appreciates and admires Ukraine President Zelensky's desire to join NATO, which is a main point of contention for Russia:

"And therefore, no other country can tell anyone whether they should or should not join NATO.  That should be their independent choice. That is the point of sovereignty. So I respect President Zelensky’s desire to be a member of NATO.

“NATO is a membership.  It is about nations coming together as a group, making decisions collectively around, again, principles and what will be, then, the conditions and — and the standards of membership.  And so that is the process.

Harris said she told Ukraine President Zelensky in their meeting that, "The United States stands with you. Because we do, as do this community of allies and partners."

Although the United States has sent military aid to Ukraine, President Biden has said no American troops will fight on its behalf.