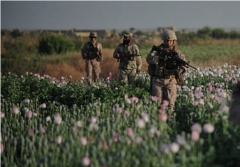 U.S. forces walk through an opium field in Helmand Province in 2011. (Bay Ismoyo/AFP via Getty Images)

(CNSNews.com) - The Central Intelligence Agency notes in its World Factbook that in 2017--while U.S. forces remained in Afghanistan--that that country was the largest producer of opium in the world and that the opium trade was “a key source of revenue for the Taliban inside Afghanistan.”

At the same time, the United Nations Office on Drugs and Crime said in its “Afghanistan Opium Survey 2020” that the “area under opium poppy cultivation increased by 37 percent” from 2019 to 2020.

The UNODC also noted that the 2020 opium production in Afghanistan was “among the four highest ever measured.”

The UNODC report published estimates for the amount of territory in Afghanistan used to grow opium going back to 1994. In the years since then, the only two years when more hectares in Afghanistan were dedicated to growing opium than in 2020 were 2017 and 2018.

In 2014, there had also been 224,000 hectares in Afghanistan that were dedicated to growing opium.

On its World Factbook page for “Illicit Drugs,” the CIA says the following:

“Afghanistan world's largest producer of opium; poppy cultivation increased 63 percent, to 328,304 hectares in 2017; while eradication increased slightly, it still remains well below levels achieved in 2015 [sic]; the 2017 crop yielded an estimated 9,000 mt of raw opium, a 88% increase over 2016; the Taliban and other antigovernment groups participate in and profit from the opiate trade, which is a key source of revenue for the Taliban inside Afghanistan; widespread corruption and instability impede counterdrug efforts; most of the heroin consumed in Europe and Eurasia is derived from Afghan opium; Afghanistan is also struggling to respond to a burgeoning domestic opiate addiction problem; a 2015 national drug use survey found that roughly 11% of the population tested positive for one or more illicit drugs; vulnerable to drug money laundering through informal financial networks; illicit cultivation of cannabis and regional source of hashish (2018).”