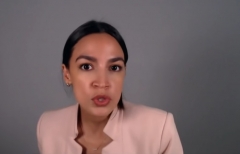 Rep. Alexandria Ocasio-Cortez said on MSNBC on Wednesday that Joe Biden’s new stimulus proposal to spend $2 trillion on what he calls “That American Jobs Plan” is not enough.

Ocasio-Cortez says that Congress instead ought to approve $10 trillion in additional spending.

“That $2.2 trillion, $2.25 trillion over eight years, I have serious concerns that it’s not enough to realize the very inspiring vision that Biden has advanced,” Ocasio-Cortez said.

Maddow followed up, asking: “But when it lands in the House, you and your colleagues may say, $2.25 trillion is a starting point, but this needs to be a bigger bill. This needs to get larger before the Senate even gets a look at it. Is that a fair way to expect that may be the way this goes?”

“You know, if we could wave a magic wand and progressives in the House were able to name any number and get it through, which obviously isn`t the case, but if we`re looking at ideals and what we think is the actual investment that can create tens of millions of good union jobs in this country, that can shore up our health care, our infrastructure, our housing, and doing it in a way that draws down our carbon emissions to help us get in line with IPCC standards, we’re talking about realistically $10 trillion over ten years,” said Ocasio-Cortez.

“And I know that may be an eye-popping figure for some people, but we need to understand that we are in a devastating economic moment,” she said.

“Millions of people in the United States are unemployed. We have a truly crippled health-care system, and a planetary crisis on our hands, and we`re the wealthiest nation in the history of the world,” she said.

In a fact sheet, the White House explained that Biden’s proposal would spend “about $2 trillion this decade.”

“The President’s American Jobs Plan is a historic public investment–consisting principally of one-time capital investments in our nation’s productivity and long-term growth,” said the fact sheet. “It will invest about 1 percent of GDP per year over eight years to upgrade our nation’s infrastructure, revitalize manufacturing, invest in basic research and science, shore up supply chains, and solidify our care infrastructure. These are investments that leading economists agree will give Americans good jobs now and will pay off for future generations by leaving the country more competitive and our communities stronger. In total, the plan will invest about $2 trillion this decade.”