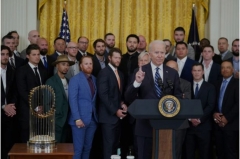 President Joe Biden met at the White House on Friday with the 2020 World Series champions, the Los Angeles Dodgers.

In a speech, while the team stood behind him, Biden talked about Dodger greats from the past—Sandy Koufax and Fernando Valenzuela—and then joked about his age.

“But the Dodgers are a lot more than a baseball club. They really are,” Biden said. “They’re a pillar of American culture and American progress. And that’s for real.

"The team that brought us the voice of Vin Scully and Sandy—the arm of Sandy Koufax and Fernando Valenzuela—and I was talking with staff and they said, ‘I want to teach you how to pronounce that name,’” said Biden. “I said, ‘I watched him pitch.’ But I’m only 37.

“But it’s— I wish—anyway, above all else, the heart of Jackie Robinson,” Biden said.

“Now, you’re building a new dynasty for a new generation,” he said.