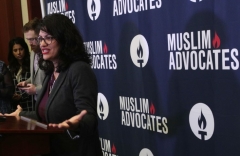 (CNSNews.com) - Rep. Rashida Tlaib (D.-Mich.) sent out a tweet on July 19, as the Islamic feast of Eid al Adha was about to begin, saying that faith keeps her “grounded.”

“Faith keeps me grounded, humble and have a strong belief in humanity,” Tlaib said in her tweet.

“I pray,” she said, “that all those who are celebrating Eid al Adha (Festival of Scarifices [sic]) a joyful day full of love, happiness and forgiveness. #EidMubarak.”

“Eid al-Adha marks the culmination of the hajj (pilgrimage) rites at Minā, Saudi Arabia, near Mecca, but is celebrated by Muslims throughout the world. As with Eid al-Fitr, it is distinguished by the performance of communal prayer (ṣalāt) at daybreak on its first day. It begins on the 10th of Dhū al-Ḥijjah, the last month of the Islamic calendar, and continues for an additional three days (though the Muslim use of a lunar calendar means that it may occur during any season of the year). During the festival, families that can afford to sacrifice a ritually acceptable animal (sheep, goat, camel, or cow) do so and then divide the flesh equally among themselves, the poor, and friends and neighbours. Eid al-Adha is also a time for visiting with friends and family and for exchanging gifts. This festival commemorates the ransom with a ram of the biblical patriarch Ibrāhīm’s (Abraham’s) son Ismāʿīl (Ishmael)—rather than Isaac, as in Judeo-Christian tradition.”