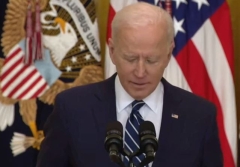 More than six in ten voters are concerned that President Joe Biden is currently too old and mentally unfit to serve as the nation’s commander-in-chief, but his poor job performance is the main reason cited for why they think he shouldn’t run for a second term, a new nationwide survey finds.

In a survey of 1,308 U.S. registered voters, conducted June 28-29 by the Harris Poll and HarrisX, 71% of respondents said that Biden should not run again, while 29% said that he should.

“Bad president” was the top response given when those who said Biden shouldn’t run were asked to give a reason, followed by “too old” (30%) and “time for a change” (26%).

Biden generally received poor marks on a number of different issues when voters were asked to rate his job performance.

Just 38% of voters voiced overall approved of Biden’s performance, with approval on specific issues ranging from a high of 50% for his reaction to coronavirus to a low of 28% for his handling of inflation.

In a separate question, 62% said inflation is either their greatest (44%) or second greatest (18%) concern.

About a third approve of the way Pres. Biden has dealt with the economy (32%) and crime/violence (34%).

Nearly two-thirds (64%) of voters believe that Biden is already “showing he is too old to be President,” including 73% of Independents and more than a third (34%) of Democrat voters.

Similarly, 60% reported that they currently have doubts about his mental fitness for office, a sentiment shared by 67% of Independents and more than a quarter (27%) of Democrats.