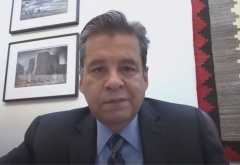 A Catholic Democrat New Mexico state senator who was denied Communion last weekend because he voted for a pro-abortion bill is asking for prayers for pro-life Church authorities “as Catholicism transitions under Pope Francis.”

On Saturday, State Senator Joe Cervantes posted a tweet announcing that a bishop had denied him Communion – and that another priest intends to do the same:

“I was denied communion last night by the Catholic bishop here in Las Cruces and based on my political office. My new parish priest has indicated he will do the same after the last was run off. Please pray for church authorities as Catholicism transitions under Pope Francis.”

In response, Christopher Velasquez, director of communications for the Diocese of Las Cruces, told the Catholic News Agency that Cervantes “was contacted multiple times prior, letting him know that if he voted for Senate Bill 10, he should not present himself for communion.”

“Bishop Baldacchino did not receive a response from the senator,” Velasquez said, adding that the denial of Communion was not political, but based solely on Cervantes support for Senate Bill 10.

“Cervantes, a pro-abortion Democrat, earlier this year co-sponsored Senate Bill 10, which repealed an inactive state statute that restricted abortion and protected conscience rights of healthcare providers. Cervantes had voted for legislation similar to Senate Bill 10 in 2019.”