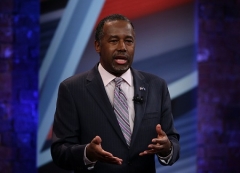 Former HUD Secretary and renowned Neurosurgeon Ben Carson says Critical Race Theory is “a bunch of garbage” because it teaches that people race is the ultimate determinant of who they are.

In an interview with Newsmax TV on Sunday, Dr. Carson explained that Critical Race Theory is taught to convince people that their fates are pre-determined by race:

“It’s an attempt to use race as a mechanism for redefining our society, redefining what it was based on and how it impacts everybody and it wants our people to believe that your race is the most critical determinant of who you are and what happens to you in our society. In other words, it’s a bunch of garbage.”

The only thing that can destroy America is internal conflict, so the left strives to turn Americans against one another by stoking racial animosity, Dr. Carson said:

“The only thing that can really destroy our country - our country is a magnificent place – it can’t be destroyed by Russia or China or Iran or North Korea — but it can be destroyed from within, there’s no question about that. That’s what Jesus meant when he said a house divided can’t stand, Lincoln reiterated that.

“And, we need to recognize that we, the American people, are not enemies.”

But, people are actually defined by their brains, not their skin color, the neurosurgeon explains:

“It’s not their nose or their hair or their skin that make them who they are, it is their brain and the way that it processes information. That’s what determines your character; that determines exactly who you become.”

Knowing this, the left is utilizing the nation’s educational system to pervert history, indoctrinate children, and permanently brainwash them with hatred of America, Dr. Carson said:

“The brain is like a super-computer: you program it and it responds accordingly.

“It was Vladimir Lenin who said: ‘Give me your children to teach for four years and the seeds that I plant will never be uprooted.’

“They know the importance of getting into the school systems and indoctrinating the young people and that it will have a permanent effect. We are already starting to see the seeds of that. Last summer, with all the things that were going on in Portland and Seattle. A lot of those young people are coming of age now.

“They’ve been taught to hate the United States, hate who we are. You know, if they were taught the true history, they would recognize that this is time to celebrate who we are.”