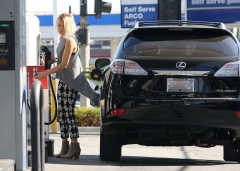 With prices at the pump hitting record highs this week, the Biden Administration canceled pending oil and gas leases in Alaska and the Gulf of Mexico.

“Biden chooses to further cut American energy production and drive our gas prices higher. Folks, they are doing this ON PURPOSE and do not care what it costs our families!!” Texas Republican Rep. Beth Van Duyne tweeted late Wednesday evening after the news broke.

More than a million acres of potential drilling land has been rendered off-limits, Fox Business reports:

“The Biden administration canceled one of the most high-profile oil and gas lease sales pending before the Department of the Interior Wednesday, as Americans face record-high prices at the pump, according to AAA.

“The DOI halted the potential to drill for oil in over 1 million acres in Alaska's Cook Inlet, along with two lease sales in the Gulf of Mexico. The move comes as Biden has taken a few actions to combat high gas prices, despite his administration's generally hostile approach to the oil industry.”

Biden’s hypocrisy was called out by American Petroleum Institute’s Senior Vice President of Policy, Economics and Regulatory Affairs Frank Macchiarola, in a statement to The Daily Caller News Foundation:

“Unfortunately, this is becoming a pattern – the administration talks about the need for more supply and acts to restrict it.”

"This announcement puts the Biden administration’s blatant disregard for Americans, our economy and our ongoing inflation crisis on full display. Mere days after gas prices hit historic highs, President Biden is killing new offshore leases for the rest of the year. This keeps us squarely in the arms of OPEC+ countries to meet our energy needs. The decision is a slap in the face to Americans who are already being forced to choose between sky high gas bills and grocery bills. I can’t imagine a more tone-deaf, short-sighted decision that jeopardizes our economic and energy security without doing a single thing to help the environment or the American people. President Biden should call off his domestic energy attack dogs, put an actual commonsense plan in place, and for once try to make the situation better rather than Bidenizing it."

On Thursday, the national average cost of a gallon of regular gasoline hit $4.418, according to AAA, breaking the previous record high of $4.404 set on Wednesday.