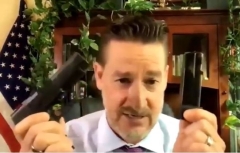 “I’m at my house – I can do whatever I want with my gun,” Rep. Greg Steube (R-Fla.) shot back at House Judiciary Chair Jerry Nadler (D-N.Y.), who had rebuked him for displaying guns during a live, virtual, video presentation.

During a House Judiciary Committee meeting on a range of gun control proposals, Rep. Steube displayed on-camera several pistols which would be effectively banned by prohibiting the sale of the magazines required by the pistols.

In his video remarks, made from his residence, Steube said that Democrats are attempting to institute a back-door gun ban by banning magazine sales. The congressman demonstrated how the remaining legal magazines wouldn’t fit in the still-legal pistols

“I hope to God that is not loaded,” Chairman Nadler exclaimed as Rep. Steube showed how the pistol he carries for protection would be rendered useless by the magazine ban.

“I’m at my house: I can do whatever I want with my gun,” Steube fired back, before continuing on with his remarks:

Rep. Steube: “Here’s a gun I carry every single day to protect myself, my family, my wife, my home. This is an XL Sig Sauer P365 – it comes with a 15-round magazine. Here’s a seven-round magazine, which would be less – which would be lawful if this bill were to become law – it doesn’t fit.

“So, this gun would be banned.”

Chair Nadler: “I hope to God that is not loaded.”

Nadler, then, tried to raise “a point of order,” but Stuebe continued with his remarks.

Five times, Nadler attempted to interrupt Stuebe by asking, “Would the gentleman yield for a question?”

Steube did not respond the first four times, but on the fifth, he declined Nadler’s request:

“No. I’m trying to get my point across in the few minutes I have left.”

During his remaining time, Rep. Steube noted how residents of places, like Florida, that do not prohibit magazine sales, are several times less likely to be murdered than are those in states that do have bans.