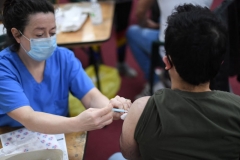 Not only are American adults who watch CNN and MSNBC more likely to overestimate the percentage of people who die from COVID than are fans of Fox News and Newsmax, they’re also more prone to believe that the COVID mortality rate is more than five times higher than it actually is.

In a survey of 1,000 U.S. American adults conducted on August 26 and 29, 2021 by Rasmussen Reports, respondents were asked “What percentage of people diagnosed with COVID-19 do you think have died from the disease?” According to Johns Hopkins University, the COVID-19 case-mortality rate – the percentage of diagnosed patients who have died from the disease – is 1.6% in the United States.

Fully 64% of regular CNN viewers and 62% of those who rely on MSNBC news overestimated COVID mortality, compared to 50% of Newsmax followers and 56% of Fox News fans.

Less than half (48%) of those who don’t watch any cable news overestimated the likelihood of dying from COVID.

CNN and MSNBC viewers were also more likely to think the COVID mortality rate is more than five times the actual rate. Here, 22% of CNN viewers and 23% of MSNBC news followers said they thought the death rate is higher than ten percent, instead of less than two percent. Meanwhile, 17% of Fox News Channel viewers and 18% of Newsmax viewers said they thought the rate was over ten percent.

About two-thirds (66%) of Democrats overestimated the risk of dying from COVID, compared to approximately half of Republicans (49%) and others (52%).

According to Rasmussen analysis, this disparity between the two parties is likely the result of their preference in media outlets:

“Perhaps because of different choices in news media consumption, Democrats are significantly more likely than other Americans to overestimate the death risk from COVID-19. Twenty-eight percent (28%) of Democrats think more than 10% of people diagnosed with COVID-19 have died from the disease – more than five times the actual mortality rate. Just 14% of Republicans and the unaffiliated believe the COVID-19 mortality rate is over 10%.”