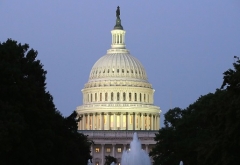 U.S. likely voters are largely skeptical that Congress will actually make a serious effort to address the nation’s most important problems, a new Rasmussen survey reveals.

Nearly five times as many believe it’s “not at all likely” (33%) as say it’s that Congress “very likely” (7%) that Congress will “seriously address the most important problems facing our nation,” the survey of 930 likely voters, conducted July 25-26, finds.

While 29% say it’s at least “somewhat” likely Congress will act, more than twice that number (66%) say it’s either “not very” or “not at all likely.”

Voters consider violent crime and inflation to be two of the most pressing problems in the U.S. today, according to a national Rasmussen survey, conducted July 27-28, shows. Fully 85% of voters are “concerned about the problem of violent crime in America, with 60% saying they’re “very concerned.” Likewise, 79% are either very (49%) or somewhat (30%) worried about the threat of inflation.

Meanwhile, just 17% believe that Congress is doing a good or excellent job, while 54% rate Congress’ performance as poor.

Voters’ approval of Congress is down from three months earlier, but poor ratings are typical for the legislative body, Rasmussen notes:

“Those numbers are worse than in April, when 21% gave Congress excellent or good ratings. Historically, positive ratings for Congress have only reached 25% once (in February 2017) in regular surveying by Rasmussen Reports since 2007. Poor findings routinely ran in the 60s and 70s from 2011 through 2014.”