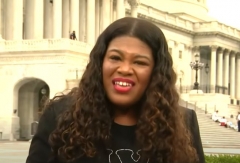 On Wednesday, a new law limiting abortion went into effect in Texas – and Rep. Cory Bush (D-MO) claims it will “disproportionately harm” queer people in the state.

The new law, which limits abortions after six weeks of pregnancy, has outraged abortion advocates and been welcomed by pro-life groups, Fox News reports:

Both sides of the abortion debate reacted strongly after the Supreme Court rejected an attempt to halt Texas' controversial law S.B. 8.

The law effectively limits abortions after six weeks of conception. "No child should have her skull crushed and be ripped into pieces in an abortion," tweeted Live Action President Lila Rose.

Rep. Bush condemned the new law in a tweet Wednesday, claiming that it will “disproportionately harm” minorities, poor, young – and even “queer” – Texans:

“I’m thinking about the Black, brown, low-income, queer, and young folks in Texas. The folks this abortion health care ban will disproportionately harm. Wealthy white folks will have the means to access abortion care. Our communities won’t.”

But, even Planned Parenthood’s definition of “queer” limits the term to those who are incapable of giving birth, except via artificial insemination (a procedure to have, not abort, a baby):

“Queer is a word that describes sexual and gender identities other than straight and cisgender. Lesbian, gay, bisexual, and transgender people may all identify with the word queer.”