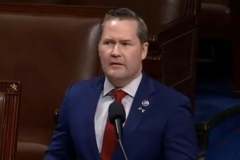 In one sentence, Rep. Michael Waltz (R-Fla.) took a shot at both the Biden Administration’s response to the nation’s baby formula shortage and the controversy over its reported plan to provide free crack pipes to drug users.

Speaking to reporters on Thursday, Rep. Waltz cited his own family’s difficulty obtaining baby formula for a newborn child:

“I think we need to take a moment and think about the fact that, in Joe Biden’s America, it seems like it is easier to get a crack pipe in a government-funded smoking kit than it is to find baby formula.

“I’m a new father of a four-month-old. And, the other piece, is that this crisis has been brewing for months. Since my four-month-old has been born, I’ve had my entire family, across four states, scouring the shelves looking for formula on which he is dependent to survive.”

Despite repeated denials by the Biden Administration, a Washington Free Beacon investigation found that free crack pipes are, indeed, being included in government-funded “safe-smoking” kits:

“Crack pipes are distributed in safe-smoking kits up and down the East Coast, raising questions about the Biden administration's assertion that its multimillion-dollar harm reduction grant program wouldn't funnel taxpayer dollars to drug paraphernalia.

“The findings are the result of Washington Free Beacon visits to five harm-reduction organizations and calls to over two dozen more. In fact, every organization we visited—facilities in Boston, New York City, Washington, D.C., Baltimore, and Richmond, Va.—included crack pipes in the kits.”