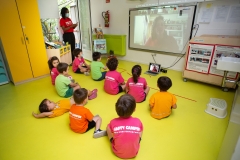 (CNS News) – In a July 8 tweet, President Donald Trump criticized Democrats for wanting U.S. schools to stay closed for political reasons, adding that in some European countries “schools are open with no problems.” According to the information available, Trump is largely correct, many of the European schools are open or will be soon opening.

In his tweet, Trump said,  “In Germany, Denmark, Norway, Sweden and many other countries, SCHOOLS ARE OPEN WITH NO PROBLEMS. The Dems think it would be bad for them politically if U.S. schools open before the November Election, but is important for the children & families. May cut off funding if not open!”

The president is accurate, many European countries have opened their schools in some capacity.

Denmark led by opening on April 15, bringing the youngest students back first. The Danish schools emphasized physical distancing and hygiene, and did not require masks.

The vice president of the Danish Union of Teachers, Dorte Lange, said of the situation, "We are glad to say the re-opening up to now has been quite successful. Teachers who have health issues, or who have family members who might be at risk, can teach online from home,” according to the BBC.

In Norway, schools first reopened on April 20 and 1st-4th grades followed the next week on April 27. The country has not experienced any significant rise in cases or deaths as a result.

Prime Minister Erna Solberg noted, “Thanks to our common efforts since March, we have brought the contamination under control. We can therefore, over time, lighten the toughest measures.”

Germany left the reopening of school to its 16 states, which ranged in their openings from April 27 to May 4. Germany prioritized bringing older students back first so they could complete their exams.

Germany’s 7-day average of coronavirus cases has dropped down to 384 in comparison to the average of 1,075 on May 4.

Sweden, who took a different approach than most countries, never implemented a lockdown or closed its schools. While they did experience a high number of deaths, especially in nursing homes, the evidence has not shown that schools were a critical factor, according to Axios.

France has had to approach the reopening of schools more cautiously, especially in denser populations. Their minister of education, Jean-Micheal Blanquer, sought to show the two-sided effect of not opening schools. Blanquer said, “There are always worries and questions, but even so we should not push school to one side in this current difficult period, because there will be terrible damage if we lose a generation of children who have been stopped from going to school for several months,” the Guardian reported.

The question of opening schools is being increasingly discussed in the United States. State and school administrations have begun weighing options for school openings, with some universities and primary schools opting for online classrooms.

President Trump and Secretary of Education Betsy DeVos held a roundtable discussion on reopening schools with teachers and health officials on July 7. They advocated for schools to reopen in the fall, but have experienced push back from school leaders and the teachers’ unions.

President Lily Eskelsen García of the National Education Association, the largest teachers union in the United States, responded to Trump’s roundtable discussion and recommendation in an NEA press release. She said, “Educators want nothing more than to be back in classrooms and on college campuses with our students, but we must do it in a way that keeps students, educators and communities safe. The reality is no one should listen to Donald Trump or Betsy DeVos when it comes to what is best for students.”

García argued that Trump’s policy on schools reopening was geared toward election ambitions.

“Trump has proven to be incapable of grasping that people are dying -- that more than 130,000 Americans have already died,” she claimed. “Instead, everything is about his re-election. Our number one priority is that we keep our students safe.”

American Federation of Teachers President Randi Weingarten spoke with Fox News on the issue saying, “Seventy-five percent of active teachers are saying, 'If we can get the safety guidance done, we want to have kids in school.’ One of the pieces of the safety guidance ... is to have a mask. Another piece is to do the physical distancing. But the other piece -- and this is where you may disagree -- is that this is going to cost 20 percent more for schools and not 20 percent less.”