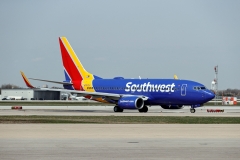 Southwest Airlines cancelled more than 1,850 flights this past weekend, citing Air Traffic Control (ATC) issues and disruptive weather. The cancellations occurred after the announcement of a company-wide vaccine mandate and the filing of a lawsuit by Southwest pilots seeking to temporarily block the mandate.

The company says that any connection between the vaccine mandate and the flight cancellations is  “inaccurate” and “unfounded,” reported CNBC.

“Employees of Southwest Airlines must be fully vaccinated against COVID-19, or be approved for a religious, medical, or disability accommodation, by Dec. 8, 2021, to continue employment with the airline,” reads a press release from the company.

“I encourage all Southwest Employees to meet the federal directive, as quickly as possible, since we value every individual and want to ensure job security for all,” said Southwest Airlines CEO Gary Kelly.

Speculation arose that the company’s lack of weekend flights was due to a shortage of pilots after the Federal Aviation Administration (FAA) blamed airline companies for the cancellations.

“No FAA air traffic staffing shortages have been reported since Friday,” the tweet read. “Some airlines continue to experience scheduling challenges due to aircraft and crews being out of place.”

The Southwest Airlines Pilots Association (SWAPA) requested a temporary block and an immediate hearing on the company’s vaccine mandate on Friday, reported Bloomberg. SWAPA claims the organization is violating the terms of the Railway Labor Act, which oversees airline-union relations.

The union is blocking more than just the vaccine mandate, however. They are also looking to amend quarantine rules for pilots, infectious disease control policy, and rules and rates of pay, according to Bloomberg.

“Pilots are at a unique risk because adverse reactions to a vaccine could affect their ability to pass periodic medical examinations required to maintain their license,” Bloomberg wrote.

Congressmen and others have taken to Twitter to support Southwest Airline pilots, saying they are standing up for their freedom.

I stand with #Southwest Airlines employees who are fighting against these mandates.

This isn’t about a vaccine, this is about freedom.

“I stand with #Southwest Airlines employees who are fighting against these mandates,” Representative Andy Biggs (R-Ariz) wrote. “This isn’t about a vaccine, this is about freedom.”