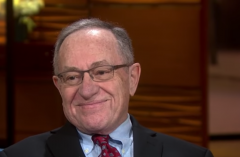 Constitutional scholar, best selling author, and former Harvard Law School Professor Alan Dershowitz said that the Democrats' latest attempt to impeach President Donald Trump is "unconstitutional" because you cannot impeach someone for engaging in "constitutionally protected speech." It is not a high crime or misdemeanor, said Dershowitz.

Yesterday, House Democrats introduced an impeachment resolution, charging Trump with "incitement of insurrection." It is their view that the president incited an insurrection against the government by asserting that there was widespread fraud in the 2020 election and by making statements that "encouraged lawless action at the Capitol."

On the Jan. 9 edition of Newsmax TV's Saturday Report, Dershowitz told host Carl Higbie that what the Democrats were doing is "unconstitutional."

"You can condemn, you can attack, you can refuse to vote for, you can do all of those things which are politically available to you, but the one thing you can't do is use the law, which is impeachment, on something which is protected by the First Amendment," he said.

Dershowitz condemned the rioters who smashed their way into the Capitol, which caused damage and led to five deaths. But the president is not responsible for that, he said.

Impeaching the president "would do more enduring harm to our Constitution than even the horrible rioters did, although they are strongly to be condemned and I’m very glad they're being prosecuted to the hilt," said Dershowitz. "It’s part of the core theory of the First Amendment that you prosecute the actors, you don’t prosecute the speaker."

"The speaker has a Constitutional right to advocate, advocate -- not incite -- advocate, which is what president Trump did," said Dershowitz.  "So, going after the actors, rather than the speaker is the way our Constitution laid it out."

The House is expected to vote on the one article of impeachment tomorrow, Jan. 13, 2021.

Alan Dershowitz is a liberal Democrat who supported Hillary Clinton for president in 2016. Over the years, as a defense attorney, he has represented clients such as Claus von Bulow, Mike Tyson, O.J. Simpson, Jeffrey Epstein and Donald Trump. Dershowitz is the author of 34 books.