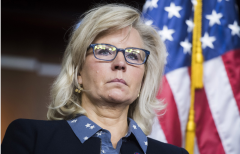 Given Rep. Liz Cheney's (R-Wy.) latest remarks that former President Donald Trump should not have a future role in the Republican Party "or the country," House Freedom Caucus Chairman Rep. Andy Biggs (R-Ariz.) said Cheney "should step down" as chair of the House Republican Conference.

At a press conference on Wednesday, House Minority Leader Kevin McCarthy (R-Calif.) was asked whether he believed Trump should speak at the Conservative Political Action Conference (CPAC), now underway in Orlando, Fla.

McCarthy said, "Yes, he should."  (Trump is scheduled to speak on Sunday evening.)

However, then Rep. Cheney, at the press conference, said, "That’s up to CPAC. I've been clear about my views of President Trump and the extent to which, following Jan. 6., I don't believe that he should be playing a role in the future of the party or the country."

Rep. Biggs also said that Cheney's remarks were "outrageous," and added that he does not believe "she is able to carry out" her duties as House Conference Chair, reported Fox News.

"I also think she is absolutely devoid of any kind of political reading of what's going on in the party," said Biggs. "If she any sense of shame, she would step down."

Cheney joined with the House Democrats and voted to impeach President Trump in January. (Trump was acquitted by the Senate.)

On Feb. 6, the Wyoming Republican Party voted overwhelmingly (56-8) to censure Cheney because of her impeachment vote against Trump, stating that she had "violated the trust of her voters ... and neglected her duty to represent the party and the will of the people who elected her to represent them."

The Wyoming GOP also said, "No evidence exists that President Trump has ever called for a violent response to political opposition. Where in comparison, Representative Cheney's new political allies on the left have continually called for violent uprisings and destruction of both personal and public property, to include raising bail money for the insurrectionists."