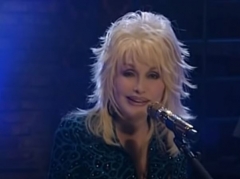 Country music legend and philanthropist Dolly Parton has sent a letter to the Tennessee legislature, which planned to erect a statue in her honor on the Capitol grounds.

The letter, which she has posted on her Twitter account, humbly asks the legislature to withdraw the bill for the time being.

Parton, who was born and raised in Locust Ridge, Tennessee, says she is “honored and humbled by the intention,” but “given all that is going on in this world,” she doen't believe now is the appropriate time to put her on a pedestal. However, if the state legislature still feels she’s worthy “years from now,” she’d gladly accept the tribute, Parton said.

The singer has proven herself to be an avid philanthropist, announcing on her Instagram account that she was donating approximately one million dollars to Vanderbilt University’s coronavirus research initiatives. Her donation helped fund the Nashville, Tennessee university's research that led to development of Moderna, one of two vaccines approved for emergency usage by the FDA for the American public.

“Dolly’s amazing generosity is a source of inspiration and will have a lasting impact on the battle against COVID-19," Vanderbilt University School of Medicine Dean Jeff Balser, MD, PhD said in a statement thanking Parton.