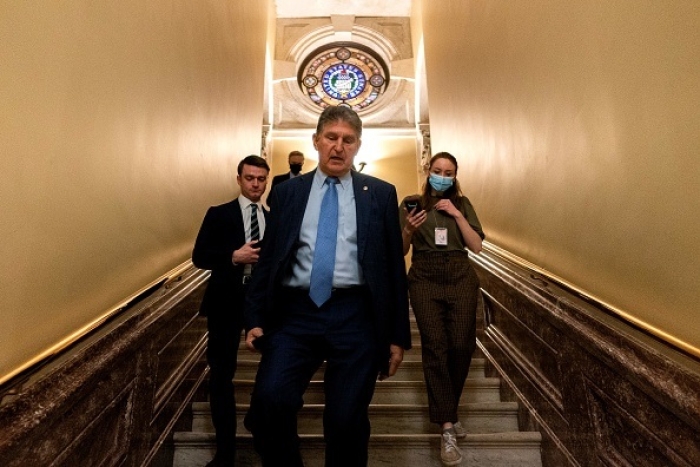 Senator Joe Manchin, Democrat of West Virginia, departs the US Capitol in Washington, DC, on March 1, 2022. (Photo by STEFANI REYNOLDS/AFP via Getty Images)

The Senate Democrats’ so-called Inflation Reduction Act of 2022 would increase taxes on nearly every American in 2023, according to analysis by Congress’s Joint Committee on Taxation (JCT).

JCT projects average tax rates would rise for almost every income category, including those making less than $10,000, if the bill passes.

As the chart below shows, income categories between $10,000 and $30,000 are the only ones listed as having the same average tax rate in 2023 under the Democrats’ bill.

(Chart from Joint Committee on Taxation)

However, the bill summary states there are “no new taxes on families making $400,000 or less” or on small businesses.

“There are no new taxes on families making $400,000 or less and no new taxes on small businesses – we are closing tax loopholes and enforcing the tax code,” the summary reads.

Sen. Joe Manchin (D-W.Va.), who negotiated the bill with Senate Majority Leader Chuck Schumer (D-N.Y.), told CNN on Sunday that the bill is “not putting a burden on any taxpayers whatsoever."

“We've taken a $3.5 trillion aspirational bill that I never could come to an agreement on any way shape or form, but I tried, couldn't get there. And we've taken $3.5 trillion of spending down to $400 billion of investing without raising any taxes whatsoever.

“Rather than risking more inflation with trillions in new spending, this bill will cut the inflation taxes Americans are paying,” Manchin wrote in a July 27 statement.

“[It will] lower the cost of health insurance and prescription drugs, and ensure our country invests in the energy security and climate change solutions we need to remain a global superpower through innovation rather than elimination.”

President Joe Biden praised the bill as a compromise version of the Build Back Better agenda, which Manchin opposed.

Republicans on the House Ways and Means Committee warn that “hundreds of billions in wasteful inflationary spending won’t reduce the deficit.”

“Rather than reduce inflation, it puts inflation on steroids,” the Ways & Means Republicans wrote:

They listed various problems with the bill, including:

-- “Democrats’ socialist drug price setting scheme will likely cause drug prices to increase for patients for the next few years, all while killing future cures from ever coming to market.”

-- “Handouts to the wealthy: Tens of billions of dollars in Obamacare subsidies will flow to the well-off.”

Ways & Means Republicans say Democrats are hiding the true costs of the bill:

The bill also provides for the hiring of 87,000 new IRS agents, which would expand audits to more than a million taxpayers, including lower income taxpayers.

Republicans said Democrats would also impose a new American energy tax by hiking fees and taxes on oil production and methane: “Families will pay these taxes in the form of higher gas prices, larger heating bills, and higher consumer prices.”

Other critics say the IRA’s 15% minimum tax on corporate income will hurt businesses and their employees.

The Wall Street Journal’s editorial board called the Schumer-Manchin bill “a tax increase on nearly every American” that “is unlikely to be a political or economic winner.”

“Raise the corporate tax rate, and you’re cutting wages and salaries for workers,” the op-ed read.

Sen. Bill Cassidy: Much of What Manchin Says 'Is Just Not True'