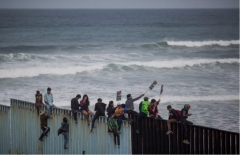 (CNSNews.com) - The 2,702-page infrastructure bill that the U.S. Senate will consider this week includes a provision that will provide $200,000,000 to the Department of Interior and the Department of Agriculture to help them in the “detection of invasive species at points of entry.”

Section 40804 of the bill (according to the text put online by the Washington Post) begins on page 1,814 and is entitled “Ecosystem Restoration.” This section provides the secretaries of Interior and Agriculture with $2,130,000,000 for this overarching purpose and then specifies ten different ways they must use that money.

(This is a screen capture of the section of the 2,702-page bill that deals with stopping invasive species at points of entry.)

As defined by the Congressional Research Service, an “invasive species is a nonnative (also known as alien) species that does or is likely to cause economic or environmental harm or harm to human health.

“The human-mediated spread of species has occurred throughout history,” says CRS. “However, as society has become more globalized, opportunities for the spread of nonnative and invasive species have increased (e.g. trade shipments can carry species and introduce them to many different regions of the world.) In addition, changing environment, ecological and sociological conditions could alter the risk for invasive species introductions in the future.”