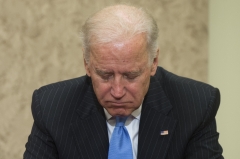 The Biden defenders at National Public Radio previewed a meeting of American Catholic bishops in Baltimore to discuss whether President Biden and other pro-abortion politicians should be denied communion for being dramatically out of sync with church teaching.

On Monday's Morning Edition, anchor Noel King insisted "Now the Vatican might disagree with them, and so might many ordinary Catholics."

NPR reporter Sarah McCammon, who covers "the intersection of politics and religion," told listeners "According to a survey last year by the Pew Research Center, Ruiz is among more than half of American Catholics who believe abortion should be legal in most or all cases." Really? Look deeper into the poll. (It seems like it's actually from 2019.)

Many "ordinary Catholics" favor abortion, because it's "ordinary" to be a Democrat. NPR's coverage of religion implies Democrats are the "ordinary" ones, and their stories suggest Democrats should set the agenda for every church.

McCammon found two "ordinary Catholics" for soundbites, and shock! Both stand with the Democrat position. "Cradle Catholic" Renee Ruiz in Oregon ("13 years of Catholic school") is "pro-choice.  And she sees the focus on abortion by some Catholic leaders as misplaced." In other words, she's just like Biden and Terry McAuliffe.

They also featured Amy Kemerer of Indianapolis, "where she attends mass weekly and home-schools her four kids." She says she voted for Trump but the bishops are wrong to discuss this. "The impact is it's dividing Catholics further. We have a church that's already suffering. And they're adding to the division and the suffering of the church. The rules have been there for thousands of years. They don't need to be rewritten."

The traditional church teaching against abortion is the one that's "been there for thousands of years." Biden, Pelosi, and the rest are rewriting it.

McCammon did feature a priest to take the traditional Church teaching, Father John Paul Kimes at Notre Dame. "Kimes says Catholics participating in grave sin should not try to take Communion in the first place." But the "ordinary Catholics" sound unanimous on NPR.

It's a little fascinating that NPR thinks Catholics who don't attend church are the most "ordinary Catholics." But conservative Americans, who they believe don't listen to NPR? Their "bad faith" opinions shouldn't be considered when discussing about how to run taxpayer-funded radio. They don't offer "genuine criticism," like "ordinary" Democrat NPR listeners.

Tim Graham is executive editor of NewsBusters, a division of the Media Research Center. This blog was first published at NewsBusters.