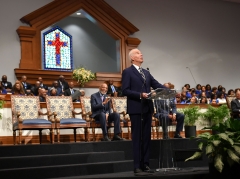 President Biden has been in office for just over a month and already he is on a collision course with the bishops. It reached a new level today when he issued a statement endorsing the Equality Act; next week it will be voted on in the House and will also be reintroduced in the Senate.

Biden sees the Equality Act as granting "dignity and respect" to everyone, making sure that "America lives up to our foundational values of equality and freedom for all." He says it is needed because "LGBTQ+ Americans" have been denied "full equality."

This is a dishonest account. If the bill were as benign as Biden says it is, why would the United States Conference of Catholic Bishops (USCCB) be so adamantly opposed to it? The bishops have not been fooled. The Equality Act is, without a doubt, the most radical assault on religious liberty, the right to life, and privacy rights ever packaged into one bill.

When Archbishop José Gomez, chairman of the USCCB, warned in November that some of Biden's policies were troubling, he explicitly mentioned "the passage of the Equality Act." As the bishops have previously noted, it could gut the autonomy of Catholic hospitals, especially with regards to reproductive issues. It could also be used to compel Catholic schools to grant boys access to the locker rooms and shower facilities of girls.

Of course, Biden never mentions such matters. His speechwriters are masters of spin.

Gomez said the Equality Act poses "a serious threat to the common good," but that wasn't the worst of it. What made it really treacherous was its endorsement by a Catholic president. The chairman of the USCCB rightly observed that "it creates confusion among the faithful about what the Church actually teaches on these questions."

Biden's statement today promoting the passage of the Equality Act means that the collision course with the bishops has reached its destination. Biden has formally triggered the crash.

I will have more in the way of detailed objections to the Equality Act next week.