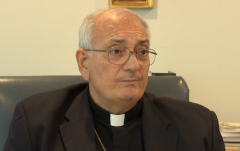 The Most Reverend Nicholas DiMarzio, Bishop of Brooklyn, has been exonerated by the Congregation for the Doctrine of the Faith at the Vatican of charges that he sexually abused minors. It is a credit to New York Archbishop Timothy Dolan, who was authorized by the Vatican to conduct an investigation, that he took this assignment seriously by hiring a law firm that retained former FBI Director Louis Freeh to do this job.

As I previously indicated, the allegations against DiMarzio were bogus from the start. In November 2019, Mitchell Garabedian, an unethical lawyer, announced that he was suing DiMarzio for abusing an 11-year-old boy, Mark Matzek, when he was a young priest in the 1970s. DiMarzio categorically denied the charges and Garabedian took several months before he acted on his claim.

In June 2020, Garabedian said he found another "victim" who said he was abused around the same time as Matzek. Once again, the Boston-based attorney did not move quickly against DiMarzio, settling for a PR smear of the bishop; he finally followed through.

The alleged second victim, Samier Tadros, said DiMarzio abused him in Holy Rosary Church in the Archdiocese of Newark. Yet as the bishop said, Tadros "did not attend the parish or the parish school and does not appear to have been Catholic."

Here is what I said on June 4, 2020. "Why would anyone wait a half century to bring a lawsuit? How is it possible that the parents of these boys [Garabedian's two clients] never knew about it [the alleged abuse]—Tadros says the abuse started when he was 6-years-old and happened 'repeatedly'—especially given its alleged serial nature?"

It seems clear that DiMarzio was pursued by Garabedian because he opposed unjust discriminatory legislation that singled out the Catholic Church for retribution over crimes against minors. This was payback.

This was reminiscent of a former office holder who accused DiMarzio in 2016 of offering her a $5,000 bribe. It was a lie. She admitted she was wrong about the date of their meeting—by three years—and wrong about the venue. She was also wrong about her accusation, which was undercut by witnesses at the meeting.

Bishops, like all priests who have been accused, are entitled to due process, and all priests, regardless of rank, should be held to the same standards by the Church, as well as by civil authorities, when they are accused.

Bishop DiMarzio is an honorable man, a great servant of the Church who is understandably loved by those who know him. He should never have had to go through these ordeals. But then again, we live in a time when some very vicious persons are out to sunder the Catholic Church.