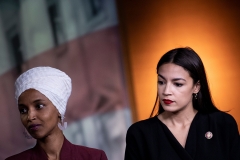 A recent Gallup poll disclosed that 81% of blacks want either more time spent by police in their neighborhood, or about the same amount of time; only 19% want less. When asked how confident they were that they would be treated with courtesy and respect by police officers, 61% were confident they would be. To be sure, most want police reforms, but there is no interest in doing away with the cops.

It would be a mistake, however, to think that all is well. When men and women of both races were asked, "Do you feel safe walking alone in the city or area where you live?" the results were predictable. Among white men, 91% felt safe; the figure for white women was 77%. But in the black community, the number dropped to 71% for men; worse, only 51% of the women felt safe.

Unfortunately for blacks, the left wing of the Democratic Party is working to make matters much more dangerous for them. To be specific, it wants to do away with the police and the prisons. Most Americans are aware of the movement to defund the police, but most are unaware that there is also a big push underway to abolish prisons.

On July 24, 2021, Rep. Alexandria Ocasio-Cortez (D-NY) campaigned in Cleveland for congressional candidate Nina Turner, a far left-wing activist who said in 2020 that voting for Joe Biden was like eating "a bowl of s***." At the rally, AOC called for prisons to be abolished: "I want to abolish our carceral system that's designed to trap black and brown men." Two years earlier, she called prisons "cages" and drew a line from them to slavery.

Rep. Ilhan Omar, another member of the "Squad," said in 2020 that there is a "cancer" in police departments and that nothing short of radical steps must be taken to destroy it. She bellowed, "we don't want your damn reforms." Two other "Squad" members, Rep. Ayanna Pressley and Rep. Rashida Tlaib, introduced legislation a year ago that would abolish prisons.

The bill to release felons from prison was enthusiastically endorsed by Black Lives Matter, proving, ironically, that black lives obviously do not matter to them. Even more bizarre, the goal of letting murderers and rapists run free—we know which neighborhoods they would go back to—was dubbed a "love letter to black people." The Klan could not improve on that.

The American people, and blacks in particular, should know that the federal government gives tens of millions of dollars each year to an organization that wants to defund the police, the Vera Institute of Justice. The public should also know that the "Squad," which wants to do away with cops and prisons, makes the taxpayers pay big bucks for their own security services.

Black Americans are being screwed by those who proclaim to champion their cause. It is not white supremacists whom blacks need to fear; it's the left-wing lunatics in the Democratic Party.