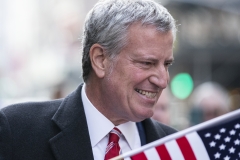 Is New York City Mayor Bill de Blasio a racist? According to the co-founder of the New York branch of Black Lives Matter, Chivona Newsome, he may be.

How could a white man who is married to a black woman be a racist? Moreover, he is the same man who refused to demand that social distancing measures be followed by Black Lives Matter protesters—he said the cause of the protests (many of which turned into riots) trumped public health concerns. Yet Black Lives Matter labels one of his policies racist.

She added that "the vaccination mandates infringe upon the civil liberties of the black community."

Is de Blasio really a racist? Not for these reasons. If a racist is defined as someone who holds that one race is superior to the other, he fails this test as well. But if the definition of a racist is someone who deliberately crafts policies that overwhelmingly victimize low-income blacks, he passes. Indeed, he is more of a threat to blacks than white supremacists are.

"I am angry about the privatizers," de Blasio told the National Education Association in 2019. "I am sick and tired of these efforts to privatize a precious thing we need—public education....I hate the privatizers and I want to stop them."

That's right, de Blasio wants to make sure black families have zero opportunities to send their children to charter and parochial schools, even though only 10 percent of black eighth graders in New York City public schools are proficient in math and 14 percent in English.

While mandatory vaccinations are hardly racist, it is rather amusing to see de Blasio tagged as enacting racism for making this decision. In fact, according to his own logic, Black Lives Matter is not being illogical when it makes this accusation.

When it comes to racial disparities in education, de Blasio sees racism everywhere. That is why his latest gambit is to do away with honor rolls and examinations to enter elite public schools. The irony is rich: He sent his son Dante to one of those elite public schools, but now he thinks it's time to lower standards.

Black students are suspended for discipline more than non-black students in New York City public schools, and de Blasio is furious with that outcome. Blacks are more likely to be arrested than non-whites, and that is another racial disparity he sees as driven by racism. Indeed, he lowered the penalties for public urination because too many "people of color" (blacks, not Asians) were being arrested.

The idea that every racial disparity is positive proof of racism is exactly what one of the leading gurus of critical race theory, Ibram X. Kendi, teaches. And up until the mandatory vaccination issue, it was de Blasio's position as well. Now he is being devoured by his own ideological agenda.

Things could really get ugly if, as Newsome says, she may respond with an "uprising" similar to the riots that ensued in 2020 following the death of George Floyd. According to her, 72 percent of blacks aged 18-44 in the city are unvaccinated.

It will be interesting to see if all those young white people from the tony sections of Brooklyn—the privileged ones who rioted with Black Lives Matter last year—will join the "uprising." It's a sure bet that almost all of them are big fans of being forced to take the jab.

They will have to choose. Do they stay with their Black Lives Matter friends and prostitute their politics by opposing vaccination mandates, or do they tell their friends to take a walk and get a vax? If it's the latter, this isn't going to go over well with Black Lives Matter.

Not every racial disparity is a function of racism, but to those like de Blasio who have been peddling this nonsense for years, it is too late in the game to call off the dogs. They've already left the pen and are coming right at him.