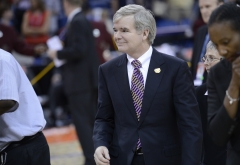 Collegiate sports and professional sports have traditionally been apolitical. They have also been at least tacitly supportive of traditional moral values. No longer. They have now laid anchor with the politics of the left, and that, in turn, has led them to adopt an aggressively secular worldview, one that is increasingly anti-Christian. Consider the NCAA.

On Monday, the NCAA Board of Governors stated that it "firmly and unequivocally supports the opportunity for transgender student-athletes to compete in college sports. This commitment is grounded in our values of inclusion and fair competition." It also said that it will not hold championship events in locations that do not agree with its position.

Its policy of restricting championship events to locales that conform to its transgender politics manifestly excludes parts of the country that maintain a Christian view of sex and sexuality. Moreover, there is nothing fair about allowing males to compete against females in athletics.

There is something else going on here that needs to be addressed. Why is the NCAA promoting sex reassignment therapy when it is well-known how dangerous it is to the psychological and physical wellbeing of those who undergo it? To this point, are NCAA officials aware that hormone therapy causes physical changes that are irreversible?

Sweden has a comparatively long history of accommodating transgender persons. It does not have an admirable record. In fact, what we know should give us pause. For example, the suicide rate for those who undergo sex reassignment therapy is astonishingly high, and the range and scale of psychiatric disorders are also disturbing. None of this has anything to do with stigma—Sweden enthusiastically embraces the transgender community.

In this country, the American Heart Association has concluded that those who undergo sex reassignment therapy have higher rates of strokes, heart attacks, and blood clots. Another study found that females who transition to males have a greater risk of developing Type 2 Diabetes.

It is a sure bet that the NCAA will distance itself from reports of serious health issues that arise from transgender athletes. It will claim it has nothing to do with them.

In March 2021, the British Journal of Sports Medicine found that male athletes who transition to female maintain their body mass and strength for up to three years, putting natural-born women at a major disadvantage. In other words, once the change takes place, biological women will be hamstrung for years.

Even if there weren't any serious side effects to sex transitioning, there is still the anti-Christian bias that is evident in the NCAA's policy.

For instance, states such as Mississippi, Tennessee, Idaho, and Arkansas have banned transgender participation in women's sports, and all of them are overwhelmingly Christian. Is it by accident that none of them are allowed to host an NCAA championship contest? Or is it a direct consequence of the NCAA adopting the anti-Christian animus that colors the politics of the left?

The NCAA commitment to inclusion stops short when it comes to Christian schools. None of the 25 members of the Board of Governors hail from these states, and the two religious-affiliated board members—from Georgetown University and Hamline University—represent schools that are unabashedly "progressive," not orthodox.

In general, male athletes are faster and stronger than female athletes. That is why everything from pre-school athletics to the Olympics are sex-segregated. Similarly, we have the Special Olympics for the disabled. There should also be a forum for transgender athletes, even if it is limited to regional competition.

The NCAA should stay out of politics, stay away from affirming sex transitioning, and stay clear of imposing punitive measures on Christian states and schools.