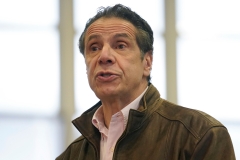 Now that Gov. Cuomo has been accused of being a serial predator, he is insisting that his due process rights be respected. Yet when it came to accused priests, Cuomo sang a different tune.

Cuomo has a different standard for himself. When asked this week about the charges against him, he said, "You can allege something, might be true, might not be true. You may have misperceived, there may be other facts."

If this is his best defense, the man is in trouble. Nevertheless, what he said was accurate. Not all allegations are true. Misperceptions are not uncommon. There may be other facts that have yet to surface. That's why the accused, including him, are entitled to due process.

However, when it came to allegations against priests—for offenses alleged to have happened decades earlier—Cuomo showed no respect for their due process rights. He was happy to sign legislation that gave rapacious lawyers out to sunder the Catholic Church all the leeway they wanted.

Just as important, Cuomo knew these lawyers would focus on the Church and not pursue claims against public school teachers. Given the generosity of the teachers' unions at election time, he was not about to demand that their sordid record of child rape be prosecuted.

When Cuomo signed the bill aimed at the Catholic Church in 2019, he called out the Church for fighting the legislation. What he said was as ignorant as it was cruel.

Cuomo accused Catholic Church officials of "threatening" those who were not supportive of their opposition to the bill. He said, "I believe it was the conservatives in the Senate who were threatened by the Catholic Church. And this went on for years."

What he failed to note is that for over a decade, bills targeting the sexual abuse of minors did not apply to the public sector. It took the bishops, and the Catholic League, to demand that the bill be made inclusive of all entities. We didn't threaten anyone.

Our major concern was the due process rights of accused priests. Most of the allegations took place a very long time ago, making it difficult to determine innocence or guilt. We know that memories fade and witnesses die, which is why we have statutes of limitations in the first place. There is nothing "threatening" about opposing bills that gut this fundamental due process provision.

If I had said about accused priests, "You can allege something, might be true, might not be true. You may have misperceived, there may be other facts," would Cuomo have agreed with me? Not a chance.

In fact, on the day he signed the bill that the Church opposed, he blithely assumed that all of the accused priests were guilty.

I want to start by applauding these victims/advocates who went through a horrendous violation in life and an aggravated defilement because it was a person in authority, a person who was supposed to be respected.

So there we have it. The accusers are to be believed and the accused is guilty. If Cuomo's standard for priests were applied to himself, then his accusers are telling the truth and he is guilty. And if that is the case, why is he still in office, especially now that he is accused of sexual assault?