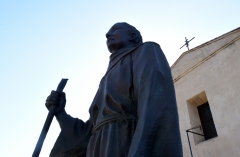 A statue of Father Junipero Serra stands in front of the San Gabriel Mission in San Gabriel, California on September 23, 2015 as a visiting Pope Francis made the controversial Spanish missionary a saint. (Photo credit: FREDERIC J. BROWN/AFP via Getty Images)

Smashing statues of American icons is all the rage among urban barbarians. Ignorant of history, they are destroying statues of those who were among the most enlightened persons of their time.

This includes Father Junípero Serra. The 18th century missionary fought hard for the rights of Indians, and was rightfully canonized by Pope Francis in 2015.

A statue of Saint Serra was toppled in San Francisco's Golden Gate Park on Friday, and the next day another statue of the legendary priest was torn down at Placita Olvera in Los Angeles. Archbishop José Gomez of Los Angeles, who is also president of the United States Conference of Catholic Bishops, singled out Saint Serra for his compassion and his effort to establish rights for Indians and women.

In 2015, I published a booklet, "The Noble Legacy of Father Serra," that detailed his many accomplishments. In light of the attacks on him, it is worth recalling some of his heroics.

Serra got along well with the Indians. His goal, and that of the Franciscan missionaries whom he led, was not to conquer the Indians—it was to make them good Christians. The missionaries granted the Indians rights and respected their human dignity, quite unlike the condition of black slaves. The Indians appreciated their efforts, drawing a distinction between the missionaries and the Spanish crown: the former treated the natives with justice; the latter did not. The civil authorities were the problem, not the priests.

Contrary to the conventional wisdom, the missionaries did not eradicate Indian culture. Indeed, they learned the native language of the Indians and employed Indians as teachers. Some cultural modification was inevitable, given that the missionaries taught the Indians how to be masons, carpenters, blacksmiths, and painters. The Indians were also taught how to sell and buy animals, and were allowed to keep their bounty. Women were taught spinning, knitting, and sewing.

Archbishop Gomez is right to point out that Serra fought for the rights of women, as well. It was the missionaries who sought to protect Indian women from the Spanish colonizers. The friars segregated the population on the basis of sex and age, hoping to safeguard the young girls and women from being sexually exploited. When such offenses occurred, Serra and his fellow priests quickly condemned them.

A total of 21 missions were established by the Franciscans, nine of them under the tenure of Serra; he personally founded six missions. He baptized more than 6,000 Indians and confirmed more than 5,000; some 100,000 were baptized in total during the mission period.

If the truth were told about Saint Serra, he would be heralded as a friend of the Indians, not as their enemy. But truth matters little to those whose hearts are full of hatred and whose minds are closed to reality.