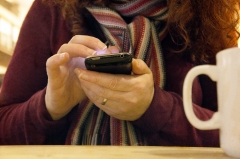 Mohammad Anwar, 66, was recently driving his Uber Eats car in Washington, D.C. when two young girls, 13 and 15, took out a stun gun and tased him. The carjackers took command and drove away, leaving the immigrant from Pakistan hanging on, wedged between the door and the driver's seat. After he was flung from the car, the automobile rolled over and crashed into two other cars. CNN called it an "accident." The cops called it murder. They copped a plea.

This story is bad enough without adding anything to it, but my reason for mentioning it has to do with something less important, though nonetheless disturbing. After the car crashed, one of the girls was upset, but not about what she and her friend just did. She was upset because she thought she lost her phone. There are pictures of her literally walking nonchalantly past the victim's body looking for her phone.

Two girls, ages 13 and 15, have been charged with the murder and carjacking of Pakistani immigrant Mohammad Anwar who was killed while working at his job delivering food in Washington, D.C., in an incident a bystander captured on video.https://t.co/z5ueWcaqXo pic.twitter.com/ypmHDjbCfe

We are a nation obsessed with our phones. This is especially true of young people. When I was a kid, phones served one purpose: they were vehicles of conversation. Now they are used for entertainment as well. This is a desire that can never be satisfied.

It's a mania. What else can we call it?

There are news stories of people walking into trains because they are staring at their phones. They have fallen off of cliffs because of this plague. Many more have caused car accidents.

When exiting an elevator, it often happens that some phone maniac walks directly into me. This also happens when I walk across the street in New York City. I'm not a small guy—I'm 6'2" with broad shoulders. Yet people keep walking into me. Most of the time, they're young women looking down at their phone. Many are also wearing earphones, compounding their distraction. They just have to be entertained.

I even saved some fool's life a few years ago. He was walking across a busy intersection, looking down at his phone, when a car came right at him. Lucky for him, I have a loud voice and he heard me scream. He stopped on a dime. Think he thanked me? Not a chance. He just kept on walking (with phone in hand, of course).

When I go to Washington, D.C., I take the train. Our office is across the street from Penn Station so it makes sense to take Amtrak instead of flying out of La Guardia. I always get there early so I can get a seat in the "Quiet Car;" no phones or loud talking are allowed. Otherwise I would go mad.

The same is true of the Long Island Rail Road. I take it to and from work every day. However, there is only one "Quiet Car," and unlike Amtrak, it is always the last car, making it a less attractive alternative. At least once a week, I have to get up and move to another car because of someone speaking loudly. On more than one occasion, I have resorted to yelling at them. Others on the train are appreciative.

Now it is commonplace to see young men and women sit at the bar, or at a table, and never speak. They are on their phone. It never ceases to amaze me. They make a point of meeting their friends at a specific pub at a specific time, and as soon as they get there they start talking to someone on their phone who isn't there. And when they meet with that person, he or she gets the same treatment. The game is ongoing.

Seeing family members sitting at a table in a restaurant and not speaking to each other is also commonplace. Father, mother, and children are all on their phone, oblivious to one another. What was the point of going out for dinner? Just to eat? The only time they speak is when they need the salt and pepper.

As a sociologist, I find this to be troubling. We are so self-absorbed that we have lost what it means to be social animals. Social animals interact, they engage, they dialogue—they don't ignore their family and friends.

As noted, the self-absorption often takes the form of being entertained. Phones feed this desire—they function as a need for many—making us more and more dependent on technology to fill our emptiness. In extreme cases, this qualifies as an addiction, leaving the individual socially retarded.

Social media and video games only make our insularity worse. The anonymity they afford is a national problem, one that can only be cured by insisting on something novel: We need to talk to each other. And we need to do it live and without dependence on contraptions of any kind.