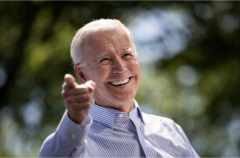 The Gipper’s optimism does not belong tacked onto second-rate socialist ideals.

It’s been fun--in a masochistic sort of way--to watch Joe Biden stumble and stutter his way further to the left as a presidential candidate. But really, it’s just sad to see a weak-willed man manipulated into pandering to the unforgiving, new ultra-left orthodoxy that’s taken over his party.

That said, Biden’s cycle of self-demeaning gaffes reached a new low this week during his first appearance with his new running mate, collectivist Kamala Harris.

Biden was introducing Harris when he delivered the following:

My good friend and fellow Reagan alum Ken Khachigian happened to be watching. When Biden uttered that one-liner, Ken stopped dead what he was doing and listened more closely. You see, in another life, Ken was a speechwriter for President Reagan and recognized Biden’s words from long ago. As a matter of fact, Ken was one of the Gipper’s favorite speechwriters.

The words Biden spoke were so familiar to Ken because they were first delivered by Reagan in 1984. It was at a reelection campaign rally in Fountain Valley, California where Reagan gave a speech and said memorably:

“Now, we’ve heard what others have offered to the American people today, in this year. They have said that America is nothing if it isn’t promises. Well, America isn’t about promises; it never has been. America is about promise. It’s about possibility.”

Sounds familiar doesn’t it? Well it should because Biden lifted it straight from Ronald Reagan’s own speech. Ken still has a copy of that speech, and I myself remember the occasion well. Joe Biden didn’t come up with an optimistic zinger overnight but stole the words of President Reagan right out of the Gipper’s mouth to promote his own socialist-controlled campaign.

Biden even had the gall to put it into a tweet later that day. I guess he thought us Reagan guys haven’t been insulted enough by this (although I’m giving Uncle Joe too much credit by assuming he thinks things through at all).

In academics, this is called plagiarism, and unfortunately, it’s nothing new for Joe Biden.

The last time this happened to Biden was in 1987, when he made an earlier ill-advised run for the White House. As reported by The New York Times (back when that paper cared about facts), Biden came under intense scrutiny for repeated instances where he’d lifted words from both John Kennedy and Robert Kennedy’s own speeches. He also stole some material from the leader of the British Labor Party of the day, Neil Kinnock. Because I guess it’s not enough to plagiarize just your fellow American politicians.

This scrutiny ultimately led to Biden dropping out of the 1988 presidential race, and rightly so. Just as an immature child who plagiarizes his homework should be punished, grown men who plagiarize speeches and know better should not be allowed to run for our nation’s highest office with impunity. Biden is behaving exactly like an immature child, and any man in his 70’s who still can’t do his own homework has a serious problem.

Speaking of schoolboys, Biden also stood guilty of plagiarism while attending Syracuse University law school, where he graduated near the bottom of his class, not the top as he falsely claimed.

Aside from being a serial thief, this appropriation of President Reagan’s words and attitude is an insult to everything for which Reagan stood. Biden tacked the Gipper’s message of hope onto a campaign that is little more than a rubber stamp for socialism. The longer he has campaigned, the more Joe Biden has shown his desperation to pander to the violent, ultra-left progressive base of the Democratic Party. Look no further than his spineless decision to tap Kamala Harris, who holds any opposition in thinly veiled contempt, as your proof.

Ronald Reagan spent the bulk of his political career fighting the evils of socialism both at home and abroad. Through his courage and ironclad optimism, Reagan helped orchestrate the fall of the Iron Curtin and the collapse of the Evil Empire that was the Soviet Union. He left behind a legacy of prosperity and an America that looked toward the sunrise, the very antithesis of what Joe Biden’s cynical, socialist campaign stands for.

Ronald Reagan’s ideals deserve better than being stolen and twisted by a weakling like Joe Biden. Likewise, Americans deserve more honesty from those who aspire to lead them.  As Founding Father Benjamin Franklin said, “There is much difference between imitating a man--and counterfeiting him.”

--Craig Shirley is a Ronald Reagan biographer and presidential historian. He is the author of five books on Reagan, the New York Times bestseller December, 1941 and a new book, Mary Ball Washington, all of which were met with critical praise. He is member of the Board of Governors of the Reagan Ranch, is a Trustee of Eureka College and lectures frequently at the Reagan Library. He is also the president of Shirley & McVicker Public Affairs.