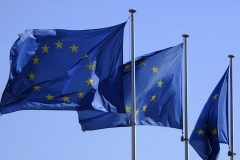 The EU flags are seen in front of the Berlaymont, the EU Commission headquarters on May 19, 2020, in Brussels, Belgium. (Photo credit: Thierry Monasse/Getty Images)

Nuclear weapons are terrible, but that gives them greater deterrent power. However, few of America’s allies have them, so Washington has promised to fight potentially multiple nuclear wars on their behalf. It is a great deal for countries that have spent decades cheap riding on the U.S.

With the Biden Administration involved in a "nuclear posture review" and a National Security Council meeting scheduled this month on the issue, a variety of allied powers are afraid that President Joe Biden will adopt a "no first use" policy or at least narrow the circumstances (so-called "sole purpose") under which he would use them. Then the good times would be over, upsetting Asian and European nations which now rely on the U.S. for their defense.

Indeed, the poor dears are beside themselves.

"Allies are essentially, in unison, collectively panicking," one unnamed American told the Financial Times. "Adopting a ‘sole purpose’ nuclear declaratory policy would be soul-crushing to U.S. allies and partners. It would gut our credibility. After Afghanistan and Nord Stream 2, there is a genuine concern as to how much more they can take."

There apparently is no limit to the whiny outbursts of defense dependents which believe it is America’s job to coddle and succor them forever. There is a simple solution, however. If they are overcome with horror that Americans might not prove willing to fight a nuclear war on their behalf, then all they need do is take over their own defense. Spend more on the military. Build more weapons. Ally with other nations which do the same. Problem solved!

Possession of nuclear weapons is an awesome responsibility. Only America has ever used them, and that was against a non-nuclear power. However, Washington has routinely threatened to employ them in the succeeding years.

"Massive retaliation" became the strategy to deter a Soviet invasion of Western Europe. Explained Secretary of State John Foster Dulles, the doctrine placed "more reliance on deterrent power and less dependence on local defensive power…local defense will always be important. But there is no local defense which alone will contain the mighty land power of the communist world. Local defenses must be reinforced by the further deterrent of massive retaliatory power."

America’s many allies grew to like the idea of the U.S. holding a "nuclear umbrella" over them to ward off any nuclear attack by other states. But that wasn’t all. They expected the U.S. to use nukes in response to conventional attack. From their standpoint, that was a lot better than having to create effective militaries of their own. It was the miracle of maximum retaliation, which put the American homeland at risk in any conflict involving Europe.

Biden sought to roll back U.S. nuclear support, backing the "sole use" limitation as vice president and 2020 presidential candidate. Moreover, the administration’s Interim National Security Strategic Guidance held: "We will take steps to reduce the role of nuclear weapons in our national security strategy, while ensuring our strategic deterrent remains safe, secure, and effective and that our extended deterrence commitments to our allies remain strong and credible."

However, since becoming president he has not indicated what he plans to do. Biden committed to "a credible and united nuclear alliance" when meeting French President Emmanuel Macron. Pentagon spokesman John Kirby intoned that "Our U.S. extended deterrence commitments remain strong and credible," which may be true even without first use, since a nuclear umbrella could be limited to an attack with nuclear weapons.

However, both Moscow and Beijing plan to modernize and expand their forces, allowing the Pentagon to grab the pole position. Observed the Brookings Institution’s Robert Einhorn: In 2021, "conditions really have deteriorated."

No surprise, so-called allies want to keep America’s nuclear umbrella open and as large as possible. An unnamed NATO diplomat told the Financial Times that "Allies are extremely concerned and in no uncertain terms have made clear what they thought." Apparently, France, Germany, and the United Kingdom as well as Australia and Japan all lobbied the president to put their interests before that of the American people. Even some U.S. policymakers worry more about allied governments than Americans. For instance, Sen. James Risch (R-ID) complained that "to even consider adopting either [no first use or sole purpose] is a complete betrayal of our allies," apparently forgetting that he was not elected to represent them.

Worse is the chutzpah of the ever hapless, helpless Europeans. One official told the Financial Times: "This would be a huge gift to China and Russia." Eh? Someone representing a country and continent which won’t use their abundant resources on their own behalf and begging for U.S. support is blaming America for giving China and Russia a gift? How about the European governments and Japan which do so little to defend their independence and freedom? Which bear but a fraction of the burden they expect Americans to shoulder on their behalf?

The arguments offered for eternal U.S. defense subsidies all presume allied incapacity. Richard Fontaine of the Center for a New American Security contended that threats from China, North Korea, and Russia have increased, so it is "not the time for a US ‘no first use’ pledge." The question, however, is why haven’t the responses of other threatened parties – cheap-riding Asian and European allies all – also increased? A no first use pledge simply indicates that conventional arms would be met with conventional arms. Whose fault is it that the conventional capabilities of Asian and European countries are so inadequate that Washington must be willing to ignite a nuclear war?

Another worry is that U.S. allies would go rogue and create their own nuclear deterrents if Americans didn’t risk their homeland. That might not be a good solution, but it still would be better than Washington promising to go to nuclear war against several antagonistic nuclear powers. It is foolish to risk American cities to protect other nations, especially those insisting that they are too busy to defend themselves.

Michael Green of the Center for Strategic and International Studies argued that "The problem with ‘sole purpose’ and ‘no first use’ is that the allies believe it, and adversaries do not." In fact, it is difficult to know who believes what. A Chinese general famously doubted that the U.S. would risk Los Angeles for Taipei, whatever Washington officials claimed. And for good reason: it would be both suicidal and stupid to do so, and the Chinese did not believe Americans were either. Indeed, the greater the threat and more peripheral the interest, the less believable any commitment looks. How little the Chinese understand the myopia of Washington policymakers.

The worst argument was repeated by retired national security officials Eric Edelman and Franklin Miller: The "change would strike at the heart of transatlantic ties and would be interpreted as a huge step toward decoupling the United States from Europe’s defense."

So? Why are the Europeans professing to be helpless if America won’t promise to start a nuclear war? If Russia is a genuine threat, why don’t the Europeans do more? Edelman and Miller complained that the president’s position "assumes that deterrence by conventional means alone can successfully forestall war (an assumption belied by centuries of European history) and that – despite two decades of U.S. disinvestment in armor, long-range weapons systems and short-range air defenses while Russia has advanced in electronic warfare and other conventional capabilities – NATO is not ‘outranged and outgunned’ by the Russians. It also ignores geography: Russia’s superior forces along the European front line could quickly seize NATO territory before U.S. forces even arrived. Finally, and most important, it assumes that NATO governments and populations are prepared to accept victory achieved by a bloody conventional war on their territory."

All this comes down to the Europeans’ refusal to arm themselves with nukes and willingness to fight with conventional weapons, instead expecting Americans to lead with nuclear weapons against a peer nuclear competitor. In such a war, what would they do? Have tea and watch as American cities burned? Don’t the Europeans have any responsibilities? Why does the seeming solution to every allied problem involve the U.S. doing, spending, and risking more for cheap-riding Europeans? Do the Europeans plan to be childlike dependents of America forever, after the Second Coming and even beyond?

The Biden Administration should decide on no first use based on what is in the interest of Americans, not allied states. Moreover, it should rethink the doctrine of extended deterrence. That’s become an especially bad idea for Korea, given the North’s rapidly expanding nuclear capabilities. As U.S. military domination fades with the rise of other powers, Washington should expect its professed allies to do more for themselves.

Of course, that guarantees even more allied wailing and gnashing of teeth. How the tears flow when US subsidies ebb. Yet helpless dependence is not a good policy for friendly governments either. While Washington cannot force allies to do more militarily, it can create the right incentives for them to do so by doing less. Much less. Once they realize that they must act for themselves if they are to be defended, they will be more likely to act responsibly.