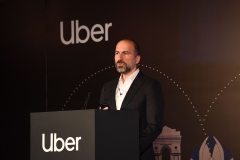 This is an obvious violation of the federal law banning racial discrimination in contracts, 42 U.S.C. 1981. Uber and Postmates are discriminating against restaurants based on the race of their owners. Restaurants that are not black-owned could easily bring a class action lawsuit against Uber under Section 1981, seeking many millions of dollars in damages.

The Supreme Court has ruled that excluding whites from a benefit based on their race violates this law, even when the exclusion is not total, but rather just gives minorities a quota, or awards them a substantial bonus for being black. For example, it ruled that racial discrimination in college admissions violated Section 1981, as well as Title VI of the Civil Rights Act and the Constitution, when it was committed by a university that automatically awarded black and Hispanic applicants a large number of bonus points for being minorities. (See Gratz v. Bollinger, 539 U.S. 244, 276 n.23 (2003)).

Yet Uber and Postmates are totally excluding restaurants owned by whites, Hispanics, and Asians from the benefit of free delivery. As the Free Beacon notes, "The programs, announced by Uber Eats and Postmates following the death of George Floyd at the hands of police, waive delivery fees for black-owned restaurants but make no such benefit available to other minority or white-owned businesses."

Section 1981 forbids discriminating against a business based on the race of its owners or staff. (See Thinket Ink v. Sun Microsystems (2004))

Restaurants owned by whites, Hispanics, and Asians can sue over this, even if Uber would respond to a successful lawsuit by charging black restaurants' customers more, not by charging white-owned restaurants' customers less. The Supreme Court has ruled that whites and males can challenge a gender or race preference even if a successful challenge would take away a benefit for women or minorities, rather than giving the benefit to men or whites. (See Heckler v. Mathews (1984)).

Unlimited compensatory and punitive damages are available under Section 1981, as are attorneys fees, so Uber could be sued for a lot of money.

Uber could also be sued by customers of non-black owned restaurants under either Section 1981 or California's Unruh Act. Customers don't need to have any ongoing contractual relationship with Uber to sue over this. The Supreme Court allowed college applicants to bring a class-action lawsuit against a college for discrimination in admissions, even though the college rejected their applications for admission, and thus never entered into a contract with them. (See Gratz v. Bollinger, 539 U.S. 244, 276 n.23 (2003); Runyon v. McCrary (1976)).

But it is probably easier for a customer to bring a class-action lawsuit in state court in California, the state where Uber and Postmates are headquartered. California's Unruh Act bans arbitrary discrimination against a class of customers -- not just discrimination based on the race of the customer. In California state court, it is easier to show legal standing to sue than in federal court.