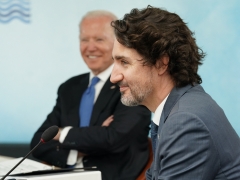 The Learjet liberals—the world’s wokerati—flew into Glasgow, Scotland, to plot against gasoline, goshawks (birdies) and you.

The annual “Conference of the Parties” (COP26), as well as Joe Biden’s plans for greenhouse-gas pollution reduction and clean-energy technologies demand the following reminders:

Gasoline is a glorious resource. Drilling for oil is the second most efficient, cheapest — and hence cleanest — source of energy.

“It requires only a narrow hole in the earth,” explained the Wall Street Journal, “is extracted as a highly concentrated form of energy” and “is up to 1,000 times more efficient than solar energy, which requires large panels collecting a less-concentrated form of energy known as the midday sun. But even solar power is roughly 10 times as efficient as biomass-derived fuels like ethanol.”

The more efficient the source of energy, the less waste and pollution are involved in its conversion into energy. Think of the totality of the production process! The fewer resources expended in bringing a fuel to market, the cleaner and cheaper is the process.

State-sponsored “sexy” technologies in the West, moreover, have decidedly ugly outcomes for worker bees in the East. The Glasgow Crowd’s cravings must be sated, but not by despoiling California, if you know what I mean.

“You buy a Prius hybrid car and think you’re saving the planet,” divulged Lindsey Hilsum of PBS’s “News Hour,” “but each motor contains a kilo of neodymium and each battery more than 10 kilos of lanthanum, rare earth elements from China. Green campaigners love wind turbines, but the permanent magnets used to manufacture a 3-megawatt turbine contain some two tons of rare earth.”

Mining for rare earth metals is a filthy undertaking. Hybrid hypocrites prefer by far that it be done by the poor villagers of the Baiyun Kuang District of Darhan Muminggan in Inner Mongolia, northern China. There lie the largest deposits of rare earth metals.

The Prius is packed with these toxins.

The Limousine and Learjet liberals who legislate “green” industries into being prefer to outsource all energy-related extraction. Leave it to the industrious Chinese to “meet 95 percent of the world’s demand for rare earth,” according to Zhao Zengqi of the Baotou Rare Earth Research Institute. As most of the separation and extraction of rare earth metals is done in China, “the pollution stays in China, too."

The environmental problems include air emissions with harmful elements, such as fluorine and sulfur, wastewater that contains excessive acid, and radioactive materials, too.

And “local villagers whose farmland has been ruined by seepage from the lake pay the price," says Hilsum.

“The Baotou Environmental Protection Bureau tested our water, and they concluded that it wasn’t fit for people or animals to drink or for irrigation." "Rare earth is the country’s resource, but small people like us need to eat, too. We live on farming, but the crops no longer grow, and we will go hungry.”

Tough luck, you provincial little Chinese men. NIMBYs (not-in-my-backyard environmentalists) like Big Brother Joe and his Glasgow accomplices plan these screwy, skewed production lines, and in the process supplant sustainable industries and imperil livelihoods. To satisfy their “visionary,” voracious excesses—and do the dirty work for them—witless NIMBYs have unwittingly conscripted the Chinese Worker.

Michael Shellenberger, a researcher and author, has imparted a great deal of wisdom on the intractable problems renewables pose. Solar and wind farms, he explains, require huge amounts of land, are intermittent, and unreliable. ("Ain't no electricity when there ain't no sunshine.") Wind turbines, moreover, are the most serious new threat to endangered birds — hawks, eagles, owls, condors, bats, too. Building a solar farm demands clearcutting entire wildlife ecosystems. In order to produce significant amounts of electricity from weak, unreliable energy flows, massive amounts of land need to be appropriated and rendered barren.

Instead of relying on glorious, clean gasoline, gaseous President Joe Brandon prefers to clear cut land, to make way for that “apex predator,” the killer en masse of birds: the wind turbine.

Perhaps the biggest obfuscation in the gimmick-car racket — which all recent presidents have fallen for — has to do with the source of the energy. Whether a vehicle is propelled by hydrogen-powered fuel cells or electricity, both electricity and hydrogen don’t magically materialize in the vehicle. They must first be generated. Be it coal, natural gas, nuclear, or a hydroelectric dam, these cars are only as clean as the original source of energy that generated the vim that powers them.

Podcast host David Vance and I discuss these and other, post-election Hard Truths in this week’s broadcast (also available here).